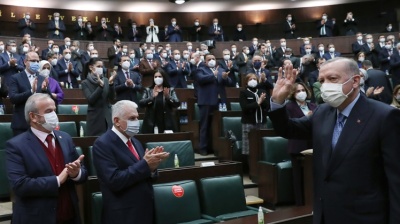 Erdogan seen after addressing a meeting of the AKP parliamentary group on January 12. / Turkish Presidency.
By bne IntelIiNews January 12, 2022

The popularity of Turkey’s President Recep Tayyip Erdogan has sunk to its lowest point since 2015 amid the economic turmoil that has engulfed the country.

Erdogan, who has led Turkey for 19 years and must face an election by June 2023, is now less popular than three potential presidential rivals. Around 38% of respondents told Metropoll that they admired Erdogan. The admiration ratings for Ankara Mayor Mansur Yavas and Istanbul Mayor Ekrem Imamoglu—both from the main opposition Republic People’s Party (CHP)—were 60% and 51%, respectively. IYI Party leader Meral Aksener was on 38.5%.

With Erdogan doubling down on his unorthodox economic policies, insisting the country can achieve “economic independence” that will create a jobs and exports boom, the Turkish lira, which sank 44% against the dollar last year, remains in a state of collapse and inflation has jumped to a 19-year high of 36%—although that is the official inflation rate not much believed by Turks, previous surveys have shown. The Inflation Research Group, or ENAG, headed by Istanbul academics, contends inflation stands at 83% and looks on course to soon hit three digits.

The economic misery and mess has also taken a toll on support for the ruling coalition that controls parliament, headed by Erdogan’s Justice and Development Party (AKP) and backed by the ultra-nationalist MHP.

A poll by Sosyo Politik Field Research Centre put support for the AKP at 27%. That compared to the 37% who said they voted for the party in the last parliamentary election in 2018. The MHP was on 6.3%, down from its 2018 election performance of 7.3%.

Around two-thirds of respondents told Sosyo Politik the economy was Turkey's biggest problem and more than half said that the Erdogan administration’s recent measures would not improve the economy.

'Does crisis spell the end?'

In a January 11 essay entitled “Does Turkey’s economic crisis spell the end for Erdogan?”, posted on the London School of Economics’ European Politics and Policy (EUROPP) blog, Balki Begumhan Bayhan wrote that Erdogan risks losing his hold on power.

She observed: “Erdogan’s current approval rating is similar to the situation in June 2015, when a general election was held in which the AKP couldn’t win outright. This was the closest the party had come to losing power—through electoral means at least—since its breakthrough in 2002. Back in 2015, Erdogan’s approval rating was only about one percentage point lower than it is today.

“While the AKP managed to escape their moment of weakness in 2015, rebounding in a repeat election held in the autumn, they did not have to contend with such a poor economic situation, and they faced a far less united opposition.”

Begumhan Bayhan added: “Erdogan is trying to build a narrative about the economic crisis which attributes blame to a variety of different factors, including the influence of ‘foreigners’ and ‘outsiders’. However, the electorate doesn’t seem to be buying the argument, and there is growing recognition that Turkey is experiencing a homemade crisis resulting from government policy.”

On January 12, Ahval reported that one of Turkey’s relatively new opposition parties, the Future Party (GP), said it was in talks with around 40 AKP MPs who said their party was being run badly and could not win the parliamentary election due to take place in tandem with the presidential election in June next year, unless snap elections are called ahead of the scheduled polls.