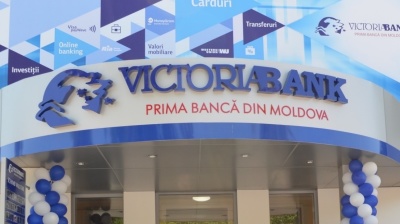 The European Bank for Reconstruction and Development (EBRD) has expressed serious concerns regarding the indictment issued by anticorruption prosecutors against the Moldovan bank Victoriabank, which it controls in partnership with Romanian bank Banca Transilvania.

“It is with serious concern that EBRD learned about the recent court warrant authorising the prosecutors to seize assets of Victoriabank in connection with the investigation of fraudulent activities in the Moldovan banking sector in 2014,” said a press release issued by the development bank on August 12.

The EBRD says that it trusts that the investigation will respect clients and customers of Victoriabank as well as its current shareholders, and be carried out in accordance with due process and due consideration of potential consequences for the Moldovan banking system.

Failure to do so risks destabilising the entire financial sector with grave consequences for Moldova’s economy, the EBRD warned.

In a press release, Moldova’s Head Prosecutor’s Office confirmed that judges had approved the seizure of assets worth MDL1.9bn (€117mn), out of which MDL1.85bn will be in financial assets, from an unnamed bank that, it said, is being investigated in connection to bank frauds.

“By applying this measure, the prosecutors pursue the purpose of repairing the damage caused by committing money laundering offences in the interest of an organised criminal group and abuse of office, with their possible special confiscation, for the benefit of the state,” the press release read.

The Head Prosecutor’s Office added that prosecutors' investigations are “strictly legal”, the efforts of law enforcement bodies being aimed at documenting, within the limits of criminal law, identifying and prosecuting all those involved in the robbery of the national banking system, and last but not least — recovering the damage caused to the state and citizens.

The investigations involving Victoriabank are probably linked to a MDL2bn (a sum close to that seized by the prosecutors) loan extended by the bank to Banca de Economii a Moldovei (BEM) just before BEM and two other banks siphoned some $1bn out of the country. The damage, including the MDL2bn (some $165mn at that time) lent by Victoriabank to BEM, was initially covered by the central bank then by the government, by the issuance of public debt accounting for over 10% of the country’s GDP.

EBRD was a shareholder of Victoriabank in 2014, but at that time the management of the bank was hijacked by an organised group — and the bank’s actions in court, aimed at appointing new management, confirm this. According to sources close to the matter, the management was at that time controlled by Vlad Plahotniuc, Moldova’s former political leader who fled the country after the change of government in mid 2019. Plahotniuc is believed to have taken over the bank indirectly from its former owner Veaceslav Platon.

Under a programme coordinated with the IMF starting 2016, Moldova carried an extensive restructuring of the banking sector including rewriting the regulations. In this context, Romanian bank Banca Transilvania became a majority shareholder in Victoriabank, beside the EBRD, in 2018.

In a press release, not published on its website yet, the National Bank of Moldova argues that Victoriabank has been part of the extensive reform process carried out in recent years in the banking sector, through which the bank has improved its activity in several strategic chapters: shareholder transparency, corporate governance, compliance with prudential rules, risk management.

“In the context of the recent actions of the investigative bodies, the National Bank of Moldova welcomes the opening of the management of Victoriabank to work with them,” the central bank’s press release reads.

Notably, several members of the central bank’s management are being investigated by prosecutors in connection to the bank frauds.