EBRD 2022: Living in a time of turbulence 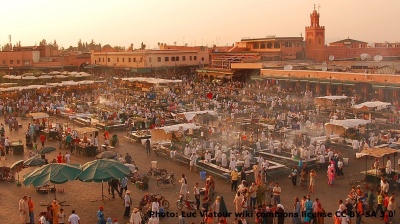 All the countries of Emerging Europe will be hurt by the spillover effects from Russia's war on Ukraine, but North Africa is particularly vulnerable. / Photo: Luc Viatour wiki commons licence CC B
By Ben Aris in Marrakech May 11, 2022

The war in Ukraine is spilling out to affect the economies of the entire catchment area of the European Bank for Reconstruction and Development (EBRD), which includes Emerging Europe, Central Asia and North Africa.

There will be an economic slowdown emanating with decreasing severity from the epicentre in the Donbas region of Ukraine, but while Ukraine will of course take the worst hit, the looming food crisis in North Africa and possible debt crisis caused by soaring inflation could possibly do long-term damage to the countries on the southern shores of the Mediterranean, say the EBRD experts.

The war in Ukraine has come at a bad time for many emerging countries in the region that were already weakened by the coronavirus (COVID) pandemic. Having spent heavily on support measures for their populations, the spike in commodity prices, especially energy, coupled with soaring inflation, which has forced central banks to make growth-killing rate hikes, has only added to the headaches.

“All the post-COVID gains will now be wiped out,” said the EBRD’s chief economist, Beata Javorcik, during a panel discussion of the economic outlook for the region at the EBRD’s annual meeting in Morocco. “Many countries in the region already had depleted financial reserves and now the high inflation is driving up the cost of borrowing that adds to their problems… Many countries that have not talked to the International Monetary Fund (IMF) for years are now opening talks as they work out a way to fund their countries.”

For Ukraine the EBRD expects a 30% GDP contraction this year. Javorcik estimates that between a third and half of all its companies have temporarily ceased work and that territory that accounts for 60% of gross production is currently the scene of hostilities.

In addition to the destruction in Ukraine, another factor that will depress Ukraine’s recovery is that around 13mn people have been displaced, either internally or who have left the country completely, out of a population of around 35mn.

Russia too will be badly affected, with a 10% GDP contraction, says Javorcik, which is less than some other estimates “but it is still more than at the height of the COVID crisis and it's quite a contraction”. An article in the Russian press the same week, based on a leaked Russian Ministry of Finance document, put the internal contraction estimate for this year at closer to 12%.

Thought is already turning to reconstruction, but the task is daunting. While the Kyiv Economic School has estimated that some $600bn of total economic damage has been done, Guriev, together with colleagues, has done a first estimate of the cost of a mooted Marshal Plan to rebuild the country and concluded it will need to amount to between $200bn and $500bn.

“That is unprecedented,” he told bne IntelliNews. “In current terms the original Marshal Plan cost $160bn in today’s dollars, so this is going to be the biggest ever programme.”

Russia will have to contribute to the cost and Guriev and others assume that some sort of reparations will be imposed on Moscow.

“Moscow will refuse to pay, but then the West will have to seize Russian assets,” says Guriev. That could include the approximately $300bn of Central Bank of Russia (CBR) assets seized at the start of the war, which are only frozen and technically still belong to Russia.

But the pain for Russia is not the 10% contraction per se, but the fact that the Russian economy will not bounce back after the war is over.

“This is not like the COVID crisis where economic contractions were deep, but it was clear the economies would bounce back once the epidemic was over,” says Guriev. “The sanctions will remain in place and Russia has been decoupled from Europe. This will hit everyone: the people, the oligarchs, they will all see a huge drop in income of at least 10%. It is hard to be optimistic about the short-term outlook for either of these two countries.”

Guriev said that the extreme sanctions imposed on Russia would slowly deplete its ability to fight by slowly removing its income from the export of hydrocarbons, but also limiting Russia’s access to technology.

“Russia will have lots of cash in the short term but it can’t make tanks and rockets without access to technology,” Guriev said. “Even leaky sanctions will stop the war when it runs out of its stock of modern weapons and chips. It cannot replace Western technology with Indian or Chinese tech. The Russian story has crystallised how globalisation benefits countries and how reliant everyone is on global trade.”

Heike Harmgart, EBRD Managing Director of the Southern & Eastern Mediterranean area, said that the effects of the war would be felt too in Morocco where the EBRD annual meeting is being held.

“[Morocco] dealt with the coronavirus [COVID-19] pandemic well. Morocco has the highest vaccination rate in all of Africa and put in 7.4% growth in 2021. A similar story was playing out in all the countries in the South and Eastern Mediterranean region, except Lebanon,” said Harmgart. “But Morocco used up a lot of its international reserves. Ukraine is not affecting the country directly but it will have a massive indirect effect, mainly via food insecurity.”

All of the countries in the South and Eastern Mediterranean are big grain importers, a large part of which comes from Russia and Ukraine. While the disappearance of Ukraine’s harvest only makes up a few percent of global grain production, so it should be possible to supply the region with food, the impact of food price inflation will by itself be extremely destructive. Morocco has already been having food trouble as it is currently suffering from the worst drought since the 1980s and food prices were already rising before the Ukraine war started.

Javorcik pointed out that it is the poor that are particularly vulnerable to the soaring food prices, as food typically makes up at least a third of the average shopping basket.

“It means that the government will have to take action or they could see political instability – a repeat of the Arab Spring that affected 40 countries – but they have to do this at a time of reduced resources and much higher borrowing costs,” says Javorcik.

Some governments in North Africa have already re-launched subsidies for bread during Ramadan that has just come to an end, in order to keep a cap on discontent. However, these are stop-gap solutions and the problems are anticipated to remain for the rest of the year.

Economists are starting to wonder if the world is about to face a period of stagflation, where prices keep rising at the same time as production decreases. That puts central banks in the paradoxical position of hiking interest rates that only depresses growth further.

One of the dangers, says Javorcik, is that economists fear inflation expectations will become unanchored – the population’s inflation expectations are based on their previous experience and also the things they buy the most. As food prices are rising so fast the population comes to believe prices will rise much faster than the economic indicators show is the reality. This is in itself inflationary and fuels the stagflation problem.