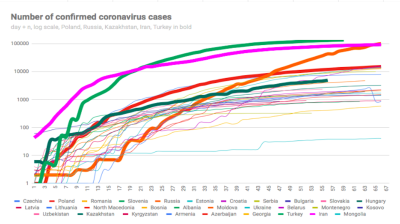 The last few days have seen the release of new statistics that confirm the deadening effect the pandemic has had on the economies of emerging Europe.

Among these are May monthly purchasing managers’ index (PMI) data from major economies, including Poland, Russia and Turkey, that show continued contractions, albeit with some indications of improvement later in the year.

First-quarter GDP data released in the last few days shows that Croatia’s economy achieved a modest year-on-year expansion of 0.4%, while Slovenia’s GDP contracted by 2.4% y/y during the same quarter, and Estonia’s by 0.7% y/y.

The growth shown in some Central and Southeast European countries in Q1 is seen as a last gasp before the full-on impact of the coronavirus (COVID-19) pandemic in Q2, with countries across the region locked down for much of the quarter. Every economy in the region is expected to show a full-year contraction in 2020.

Data from April bears that out: Georgia’s statistics office Geostat issued a flash estimate for a 16.6% y/y plunge in GDP in April, and Russia’s Ministry of Economic Development estimates that GDP declined by 12% y/y during the month.

Newly released April retail data show sales were down by 34.5% in Bosnia & Herzegovina and 25.5% in Croatia during the month.

However, there is hope that the worst of the crisis is now over; as we enter the final month of Q2 most countries in the region are now easing their lockdowns and economies are starting to return to normal.

Among those to relax restrictions recently is Uzbekistan, which is taking a regional approach. The Uzbek government has extended its coronavirus lockdown until June 15, but some parts of the country are already seeing restrictions lifted "depending on the epidemiological situation", Uzbekistan's coronavirus-response headquarters announced on May 30. 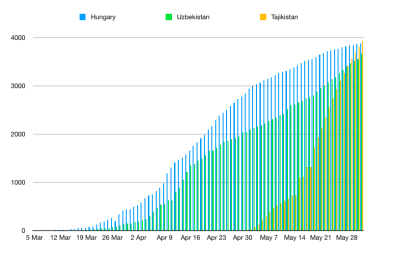 Uzbekistan is still reporting higher daily infection numbers that most countries in Central and Southeast Europe, such as Hungary, but the virus is now spreading less fast than in, for example, neighbouring Tajikistan. Source: WHO

Kazakhstan has also lifted some restrictions, but again the number of cases is growing faster than in many Central European countries. 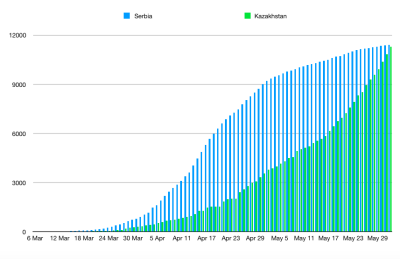 Kazakhstan has now reported as many cases as Serbia, despite having less than half as many at the beginning of May. Source: WHO

Istanbul's Grand Bazaar on June 1 opened for the first time in more than two months as Turkey stepped up its easing of coronavirus restrictions. Officials said the COVID-19 shutdown of the Grand Bazaar amounted to the longest closure in its history, except for enforced shutdowns as a consequence of natural disasters. Turkey reported 6,128 cases in the last week, down from several thousand a day a few weeks ago.

Kosovo's government allowed the opening of mosques and churches as of May 28, as it decided to further ease coronavirus restrictions. On June 1, the Slovenian government allowed the opening of hotels, swimming pools and spa and wellness centres, as part of its phased lifting of restrictions, while Croatia is starting to revive its tourism sector, targeting the Central European source markets that have managed to get the virus under control.

Resurgence of the virus

Elsewhere, however, there are worrying developments in countries such as Armenia, Iran and North Macedonia.

Armenian Prime Minister Nikol Pashinian and four members of his immediate family have tested positive for the coronavirus.

The PM said on June 1 — also his 45th birthday — he was not experiencing any coronavirus symptoms but took a test anyway as he was planning to visit troops. He said his test results came back on May 31.

"After that, my whole family took tests and they also came back positive," he said, adding that none of his family members had coronavirus symptoms either.

Pashinian said he was continuing to run the government from his residence, where he is self-isolating.

Armenia is currently enduring a spike in coronavirus cases after ending its lockdown, with many officials contending it was not economically feasible to maintain such tight restrictions on economic activity any longer. The South Caucasus country by the end of June 1 had officially logged 9,492 cases of COVID-19 (up 210 on the day), with 139 fatalities (up eight on the day).

Iran’s health minister has warned the country could be heading for a second, stronger wave of coronavirus infections, if people fail to comply with social distancing rules. The country started easing its lockdown in April, but there has recently been an increase in the number of new cases. 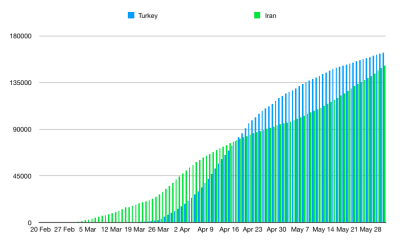 “The outbreak is not over yet and at any moment it may come back stronger than before,” Health Minister Saeed Namaki said in a news conference broadcast on state TV, Reuters reported.

“If our people fail to respect the health protocols ... we must prepare ourselves for the worst situation.”

North Macedonia also reported a spike in new coronavirus cases, with 89 new infections confirmed on June 1, and several government officials placed in self-isolation. This is in contrast with several other countries in the region, where new cases are down to zero or in single figures daily. 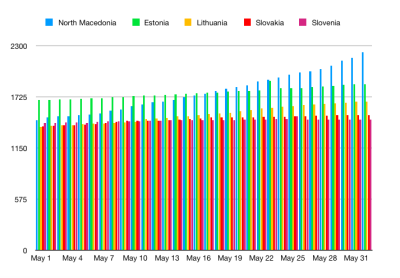 President Stevo Pendarovski decided on May 30 to extend the state of emergency for two weeks in light of the new situation.

Health Minister Venko Filipce said that about 70% of all new cases came from already known clusters, especially from the Skopje municipalities of Cair and Saraj. Numbers increased in the two municipalities after the Muslim holiday of Ramadan on May 24, which is celebrated with mass family gatherings.

Belarus has the fourth-largest outbreak in the emerging Europe region after Russia, Turkey and Iran, with 42,556 cases as of June 1, and the authorities have done little to stop the virus from spreading.

President Aleksandr Lukashenko is determined to push ahead with the August presidential election, and on June 1 pledged to prevent Ukraine-style street protests in his country around the vote.

Thousands of people in Minsk and other major Belarusian cities gathered on May 31 to protest against Lukashenko's rule, taking part in collecting signatures in support of opposition presidential bidders. In Minsk, some 2,000 people attended a protest.