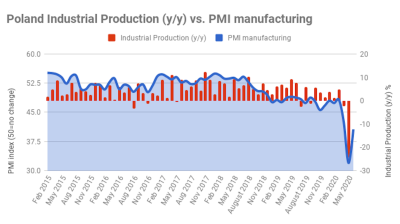 Poland’s manufacturing PMI improved 8.7 points to 40.6 in May, the second-lowest point since January 2009, IHS Markit said on June 1.

The improvement points to some easing of distress in Poland’s manufacturing sector after the index collapsed to an all-time low of 31.9 in March in the wake of the coronavirus (COVID-19) pandemic that began sweeping Poland in March.

“The latest figure signalled a slower contraction midway through the second quarter, but still the second-sharpest monthly deterioration in business conditions since January 2009 [and] the fifth-lowest on record since the survey began in June 1998,” IHS Markit said in a comment.

The PMI has now remained below the 50-point line separating contraction from growth for 19 months straight. The outlook might be improving, however.

“Looking ahead, we expect manufacturing activity to continue to rebound over the coming months. Large and timely policy support means that recoveries are likely to be quicker in Central and Eastern Europe compared with Russia and Turkey, although weak external demand will act as a key headwind,” Capital Economics said in a comment.

“Indices for output, new orders and employment all rose from their April lows but still indicated rapid rates of decline,” IHS Markit said.

The PMI figure continued to be boosted by another substantial lengthening of suppliers' delivery times, the index for which is inverted in the PMI calculation as longer times are usually associated with improving demand.

Employment and stocks of purchases continued to weigh heavily on the headline figure in May. “Employment fell at the third-fastest rate in the survey history, while input inventories declined at the second-strongest pace in nearly seven years,” the index’s compiler said.