Russia’s manufacturing PMI up slightly m/m in May, but contraction this year is significant 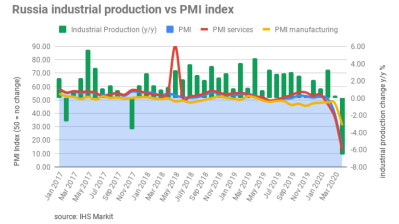 Russia's Services PMI ticked up a little in May to 36.2 from 31.3 a month earlier, but remains deeply in contractions terrority / bne IntelliNews
By Ben Aris in Berlin June 1, 2020

The IHS Markit Russia Manufacturing Purchasing Index (PMI) was up slightly month-on-month to 36.2 in May from 31.3 in April, but still well below the 50 no-change mark, as the manufacturing sector has been crushed by the coronacrisis.

The latest headline figure signalled the second-sharpest deterioration in operating conditions across the Russian manufacturing sector since early 2009, Markit reports.

“Driving the decline in overall sector performance was another severe monthly decrease in production during May. Although less marked than April's record, the decline in output was among the strongest for over 11 years. The downturn was commonly linked to weak demand conditions and smaller order volumes due to lockdown measures,” Markit said in a press release.

More damage is on the way as incomes are expected to fall going forward. Wage growth remained strong in March, at +8.6% y/y and +5.9% y/y in nominal and real terms, respectively. However, the structure has already been heavily marked by the distinct demands of the economy during lockdown.

The trend of rising wages continued in April with nominal wages up 12.1% and real incomes up 9.7%. However, the real disposable incomes remained more or less flat year-on-year, rising by 0.8% in April, but will almost certainly turn negative in May after inflation jumped.

Russians' real disposable income will fall by 3.8% in 2020, according to the economics ministry, returning the fall in incomes to its six-year long trend after a very short period of growth in the last quarter of 2019.

Manufacturing have been hurt but not as much as services where the PMI cratered to an 18-year low of 12.2 in April – by far its lowest level since the survey was launched in the noughties. The May services results are due out in the next few days and are likely to show a similar deep contraction.

Global lockdowns and weak client demand were commonly linked to the decrease in new orders, which fell at the second-steepest rate since December 2008. Subsequently, greater spare capacity led to a substantial reduction in workforce numbers.

At the same time, the drop in employment mirrored increased pessimism among manufacturers regarding the outlook for output over the coming year. Business confidence turned negative and slid to a record low amid fears of a slow recovery, says Markit.

That dip in optimism is mirrored in other polls. Trust in Russian President Vladimir Putin has more than halved over the last three years from 59% in November 2017 to 25% in May, according to independent pollster the Levada Center, and slid several percentage points in just the last few months as the coronacrisis reached its peak.

Putin’s personal approval rate has also taken a hit, but remained a relatively high 63% in March, on a par with his approval rating in 2013 when Russia’s economic growth fell to zero, marking the start of the subsequent years of stagnation. Putin’s popularity soared into the 80s in 2014 on the back of a surge in nationalistic pride that followed the annexation of the Crimea peninsula. Analysts say that the president’s popularity is falling now as he has broken the unspoken social contract with the Russian people.

The one blessing of the current crisis is that the collapse in demand has held down inflation that should have followed through from the circa 20% devaluation of the ruble, which followed oil prices down following the collapse of the OPEC+ production cut deal on March 6. Rates of inflation eased from April's recent peaks but remained solid amid a sharp rise in input costs and posted 3.1% in April, according to Rosstat, up slightly from 2.5% the month before.

The Central Bank of Russia (CBR) has already aggressively cut interest rates by 50bp in April to boost growth and the relatively modest inflation in May – there was zero inflation in the first two weeks of May and 0.1% in the third week – paves the way for more aggressive growth-boosting cuts by the central bank in June.

Unsurprisingly the May data signalled one of the most severe contractions in new business since December 2008, as global lockdowns and temporary customer closures led to subdued demand. Total sales were also impacted by less frequent, smaller orders, Markit reports.

External demand also suffered from the escalation of the virus response, with new export orders falling significantly. With the exception of April's recent low, the drop in foreign demand outpaced any seen since the depths of the global financial crisis.

Economists say they are expecting a rebound in the second half of this year, but while there may be an improvement manufacturers are expecting production to fall in the coming 12 months and the inevitable recovery to be long and slow.

Inflation may be low, but the damage done to supply chains sent input costs up steeply in May as suppliers increased their charges and ruble weakness drove import prices up, reports Markit. Although slower than April's recent peak, the rate of input price inflation was among the fastest since the VAT hike in early 2019. In an effort to partially pass on higher costs to clients, firms raised factory gate charges at a solid pace.

Sian Jones, economist at IHS Markit, which compiles the Russia Manufacturing PMI survey, commented: "May data indicated a slightly softer, albeit still severe contraction in Russian manufacturing production. Declines in domestic and foreign demand weighed on output, as the impact of the COVID-19 outbreak and emergency measures were felt yet again by goods producers.

"Manufacturers do not foresee conditions improving over the next year, as expectations turned pessimistic for the first time on record. Our current forecast for industrial production signals year-on-year contractions in output until the second quarter of 2021. Fears of a prolonged recovery partially drove a marked fall in employment as excess capacity increased."