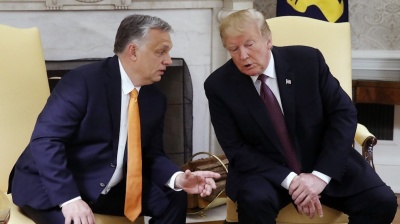 Hungary aims to strengthen its strategic alliance with the US, Prime Minister Viktor Orban said at a meeting with US President Donald Trump at the White House on May 13.

Orban is the first Hungarian prime minister to be invited to the White House since he met Bill Clinton in the Oval Office in 1998. The visit marks the end of a 2.5-year diplomatic mission to arrange the meeting, which comes days before the European Parliament election.

Orban was the first leader in Europe to support Trump's migration policies before the 2016 election but still he is the last statesman from the CEE region to receive an invitation from the US president.

"You're respected all over Europe. Probably like me a little bit controversial, but that's okay," Trump told Orban at a brief news conference. "You've done a good job and you've kept your country safe."

Hungary and the US have similar approaches to a variety of global political issues, Orban said in the Oval Office, pointing to illegal immigration, the fight against terrorism and the protection of Christian communities.

When asked about Hungary’s democratic reforms, the prime minister said his government was operating on the basis of the constitution approved in 2011.

"From the people, by the people, for the people, this is the basis for the Hungarian government. We are happy to serve our nation," he said.

Orban's spokesman, Zoltan Kovacs, said in a statement that both countries have "much that keeps us close", including "Nato, security co-operation, energy security, migration, pro-family policies, and the protection of our Judeo-Christian heritage".

The talks lasted significantly longer than originally planned, and began with a closed-door meeting that was also attended by Hungarian Foreign Minister Pater Szijjarto and US national security advisor John Bolton.

A few days before Orban's visit a bipartisan group of senators, including the Republican chairman of the Senate Foreign Relations Committee, James E. Risch, wrote an open letter to the president to warn of Hungary’s “downward democratic trajectory and the implications for US interests in Central Europe.” Lawmakers said they were concerned over the close relationship between Budapest and Moscow and the relocation Russia’s International Investment Bank to Hungary.

The talks "will mark the end of a decade-long period of high-level diplomatic isolation of Hungary,” former US ambassador to Hungary April Foley wrote in the Washington Post before Orban's visit.

During the Obama years CEE countries rightfully felt neglected, while the US administration’s efforts to reset relations with Russia overwrote long-standing friendships America had cultivated on Europe’s edge, she wrote. "US meddling in Hungary’s domestic affairs and its criticism without engagement left a deep scar on bilateral relations,” according to Foley.

Energy and military contracts on the agenda

Trump also called Hungary a "very good member of Nato." The two leaders were due to discuss Hungary's plan to buy medium-range missiles from the US.

The meeting is not only a breakthrough in bilateral relations, but it could also bring significant changes to Hungary’s military, local media reported before the meeting. In recent months, the two countries have been negotiating high-value arms deals worth billions of dollars as well as joint energy projects.

US Ambassador to Budapest David Cornstein, briefing a group of Republican staffers from Congress who were visiting Hungary a few weeks ago, claimed Budapest would soon be able to significantly reduce its dependence on Russian gas imports.

Negotiations are advancing well on Hungary buying gas from ExxonMobil’s Romanian offshore gas fields as well as American liquified natural gas from the sea terminal on the Croatian island of Krk, according to reports.

Cornstein also boasted of the expected announcement of a billion-dollar arms deal between Hungary and Lockheed Martin, and that there is a second billion-dollar deal in the making with another company. Although the ambassador did not name that other company, he was referring to a Raytheon deal, according to two sources with knowledge of US-Hungarian defence procurement talks.

Independent candidate Peter Marki-Zay backed by all opposition parties, scored a stunning victory, beating cabinet minister Janos Lazar, a strongman of the ruling Fidesz party, on his home turf in a mayoral by-election in February. Marky-Zay has been a vocal critic of the government and has called for opposition parties to run on a joint list in the upcoming local elections in the autumn. He is set to discuss the state of democracy in Hungary with US officials.