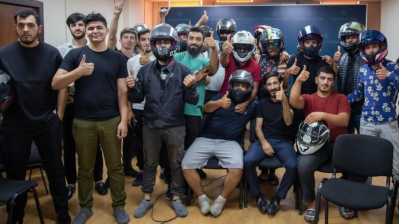 D-18 is also different in its tactics, particularly the way it has focussed on organising students and service workers, and in its focus on the regions, rather than just on the capital, Baku. / bne IntelliNews
By Cavid Aga in Baku December 9, 2022

The petrostate of President Ilham Aliyev appears more impregnable than ever, and the Azerbaijani opposition more and more marginal, but a new generation of leaders is beginning to emerge with fresh ideas on how to achieve democratic change.

Ahmad Mammadli, leader of the Democracy 1918 or D-18 movement, is a student activist who has turned his party in a more ideological and confrontational direction. He has also raised ethnic and gender issues that were ignored by the traditional opposition forces, and has dared to question the regime’s implacable hostility to Armenia.

"I immediately started to work on transforming the movement into a political one, with the establishment of an ideological stance," Mammadli told bne IntelliNews in an interview. "We started to disseminate statements on various events, which were quite alien inside the Azerbaijani environment. We started to talk about ethnic minorities' cultural rights, equal rights for everyone no matter what gender they belong to, and some irritating subjects like peace," he says.

Mammadli joined the ranks of the D-18 movement, which had been founded in 2013, as part of its student organization in 2019. As a student at Western Caspian University, he led the Student Power Centre, which fought for students' rights in universities.

He was eventually elected to the chairmanship of the movement in September 2021 and began to change its orientation. He also introduced regional working groups, and political schools where they hold lectures for members and non-members on ideology.

By March 2022, a lot of the right-wing members of the movement left, giving Mammadli the opportunity to transform the movement into a left-centre organisation with social democrat, social liberal and democratic socialist members.

According to Mammadli, what makes D-18 different from the other opposition movements is that the others are a product of post-war politics and are big tent movements that include socialists, nationalists, liberals and even anarchists and Islamists at the same time. This makes them fragile and vulnerable to pressure and co-option by the regime. In 2013, Igbal Aghazadeh, then leader of the Umid (Hope) party, even sent congratulations in a letter to Ilham Aliyev after losing to him in the 2013 presidential elections, prompting a splinter of his party to join D-18.

Aliyev took over from his father Heydar in 2013, so the family dynasty has ruled Azerbaijan for the past 29 years. The last presidential elections, in 2018,  were boycotted by the mainstream opposition and as a result, Aliyev won with 86% of the vote. This election – like all since the Aliyevs took power – was declared neither free nor fair by international organisations.

Since then the Aliyev regime has gained new popularity from its victory in the Second Karabakh war against Armenia in 2020, making the opposition even more marginal. Aliyev has also secured greater international legitimacy, with the European Union seeking Azerbaijan’s oil and gas in order to lessen its dependence on Russian supplies.

D-18 is also different in its tactics, particularly the way it has focussed on organising students and service workers, and in its focus on the regions, rather than just on the capital, Baku.

"We are organising unions, we are calling for immediate peace – thus becoming the only political power in the country to question Aliyev's foreign policy, we are active in regions, these are what irritates the system," Mammadli said.

D-18 is organising autonomous trade unions. These unions are mostly focused on the service sector, largely targeting delivery businesses and taxi companies. Their union is 90% composed of food couriers who recently went on a strike against Wolt, the most popular delivery app in Baku. The union is now working on involving more workers, especially in supermarkets.

The movement has also introduced other novelties to the political scene with the Students Desk to organise students for 'eventual revolution'. This is not restricted just to full members, Mammadli says, recalling the time he headed the Student Power Centre, when about 2,000 students were active in their events.

The student movement focusses on three major problems students deal with: the cost of education, the lack of education for ethnic minorities in their mother tongue, and quality education including academic freedom.

Corruption in education is also a big problem. One of their student members even once asked for monetary support from the movement to pay a AZN360 ($211) bribe to pass his exam at Sumgayit State University.

An ordinary student's life in Baku is filled with restrictions, with some universities introducing bans on high heels, shorts and beard length.

The situation is even worse for rural students, who are often taken out of their lectures and classes to participate in the ruling party's regional events. Poorer students often take recruitment offers from the government's troll networks, which that them up to AZN900 (~$530) a month.

Mammadli says that the party’s rural activism is what the Azerbaijani government is afraid of most. Any regional protest is responded to in a more brutal way by the police. The main reason, according to Mammadli, is that since the government has less organisation in the regions, it fears losing control.

"We are the only power defending ethnic groups' rights, be it the Talysh or the Lezgi," Mammadli says. "I was even detained when I was a student for a day in Lankaran for my activism about the Talysh language, they wanted to label me as a separatist."

These activities have drawn a harsh reaction from the government, but the final straw was Mammadli's tweet following the September 2022 clashes between Armenia and Azerbaijan.

"Ilham Aliyev has to face international courts for the things he has done not only to the Azerbaijani people but also to the Armenian people, and a democratic Azerbaijan's first decision would be punishing individuals who sow the seeds of hatred between [the Azerbaijani and Armenian] nations," tweeted Mammadli.

He was arrested en route to the airport in September 2022, from where he wanted to travel to Turkey and start his master's studies. While in detention, he says he was offered lavish governmental support for his studies if he co-operated. He says that he was even told that he could insult Aliyev but he was not allowed to talk about peace between nations, for that was the president's monopoly.

After refusing to agree to their demands, he was threatened with being sent to serve in the military – according to Azerbaijani law, a student who can't apply for a master's degree must serve in the army.

After his release, Mammadli announced that he would be a conscientious objector if he were sent to the army and he would claim his alternative military service rights. According to him, this would provoke a discussion about the alternative military service in the country, which is a constitutional right but lacks an implementation blueprint, and this is something the government doesn't want to happen.

Afterwards, his place at a Turkish university was withdrawn, and he suspects Turkish government involvement. According to Mammadli, he applied for an MA degree at Muğla Sıtkı Koçman University and obtained confirmation documents regarding his application. The Azerbaijan authorities somehow secured letters afterwards denying this from the university, the Turkish embassy and other organisations. "As Aliyev says, Turkey and Azerbaijan are indeed brothers," Mammadli jokes.

"Now the prosecutor is investigating and preparing a new case against me, accusing me of forging documents. Apparently, I somehow got an apostille for a fake document I made on a PC," he says.

According to Mammadli, the main reason for his arrest and harassment was to monopolise the discourse about peace in the country, though the official charge was just "resisting a law enforcement officer".

Despite all the setbacks and threats, Mammadli thinks post-war Azerbaijan is a fertile ground for new, radical political movements to appear. However, at the same thing, he fears his arrest might be a harbinger of a new wave of political repression in the country.

These fears have been confirmed since the interview, because of the arrest on December 9 of Bakhtiyar Hajiyev, a leading civic activist and government critic. He was arrested when his aircraft landed in Azerbaijan and he was charged with hooliganism and disregard for the court, offences that could bring five years’ imprisonment. He is being tried without access to legal representation after his lawyer and journalists were prevented from entering the courtroom.