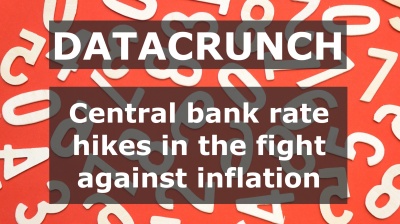 Inflation has been soaring as economies around the world recover, but central banks have been reluctant to react. That is changing now. / bne IntelliNews
By Ben Aris in Berlin June 22, 2021

The economies of Central and Eastern Europe (CEE) are bouncing back very nicely in the synchronised global recovery from the coronavirus (COVID-19) pandemic. But there is a fly in the ointment: inflation has soared too, caused by rising food and fuel prices, disrupted supply chains, and the fact that everyone is back in the shops binge-buying at the same time as a year’s worth of pent-up demand is released all at once.

Some central banks are now turning to fight inflation by hiking rates and those in Czechia and Hungary are expected to hike rates this week, the first regulators in the EU to react to climbing prices. But given that it can take up to 12 months for a rate hike to take full effect, we will not know whether they are taking the right decision until well into next year. Some analysts argue the rise in inflation is temporary and mostly due to global factors that cannot be affected by domestic rate rises, and that there is still a lot of slack in the economy and that raising rates too fast could prolong the recession.

At the same time, the pace of inflation varies greatly across the region, as bne IntelliNews reported in a recent DATACRUNCH on inflation.  And so has been the aggressiveness of central bank rate hikes. The economic recovery may be synchronised, but the central bank response has been syncopated.

Inflation has been rising fastest in Eastern Europe and Eurasia, and it is there too that the response started. Ukraine’s National Bank of Ukraine (NBU) got the ball rolling with the first rate hike in the region in March of 50bp after inflation soared from historic lows in 2020 of under 2% to start this year at 6.1%.

As the heatmap of inflation rates in CEE shows, the NBU had covered itself in glory over the preceding two years crushing inflation and had been aggressively cutting rates as price increases tumbled.

In the heatmap areas in blue are countries and months where inflation is low and under control. Those in green are where the rate has risen to moderate levels and those in red are where inflation has become a problem.

Ukraine’s inflation was in the red zone at the start of 2019, but falling steadily and was in the blue zone by the spring of 2020, but by the first quarter of this year it was creeping back into the red zone and the NBU decided to act.

It reversed its easing policy in March and followed up with another big rate hike in April (100bp) but then surprised the market by leaving rates flat in June. The governor of the NBU, Kyrylo Shevchenko, argued that inflationary pressures were already in retreat.

The problem was not as bad in Russia, and the Central Bank of Russia (CBR) had also tamed inflation in 2020, but like elsewhere it started rising again in the first quarter and CBR Governor Elvira Nabiullina followed Ukraine two weeks later with a series of rate hikes, bringing four years of easing to an end. Nabiullina hiked in March (25bp), April (50bp) and June (50bp). Unlike Shevchenko, Nabiullina is not convinced inflationary pressures have been tamed and is expected to deliver at least two more rate hikes this year.

Looking at the heatmap, the problem with inflation seems to be a lot less severe in the rest of the region. Most of Central, Southeast Europe and the Balkans have been in the blue zone for most of 2020, although inflation has risen modestly in the last two months into the green zone in all those countries.

Turkey is the outlier with extremely high inflation but it has had a currency crisis in addition to all the other external shocks everyone received in 2020, so it is little wonder it is in such bad shape, as devaluation effects has been an additional and unwelcome driver of inflation.

Inflation in the main regions (click on region legend to include/exclude it).

The next heatmap shows the prime monetary policy rates of central banks in the CEE region and the differences between the blocks stand out. All the countries of Central Europe have rates at, or just above, zero and have had them at that level for well over two years in most cases.

Southeast Europe and the Balkans have higher rates, but all of the rates (with the exception of Turkey) are still modest and from the region only Moldova had elevated rates for its successful fight against inflation.

In all of Eastern Europe and Eurasia interest rates are much higher, as all those countries were fighting against high inflation. Again, Ukraine’s huge success at bringing inflation rates down in 2019, allowing the NBU to cut interest rates rapidly, jumps out. But for most of the other countries (apart from Russia) any easing that took place was relatively modest.

That is likely to change now as more and more countries are bracing themselves for growth-killing rate hikes. The reason why banks think this is needed is clear when you look at real interest rates: the difference between the rate of inflation and the policy rate.

Prime interest rates in the main regions (click on region legend to include/exclude it).

The third heatmap is of real interest rates (monetary policy rate minus the rate of inflation) and this one paints a very different picture to the previous two heatmaps.

Inflation is high in Eastern Europe and Eurasia, but so are interest rates. The upshot is the interest rates are significantly higher than inflation in the blue zone and so this tight policy should slowly bring the rate of inflation down – as it has done in several cases, but not all. From this perspective the whole region to the east of Minsk is doing the right thing, even though the region is slowly sliding out of the blue zone into the green, where inflation and policy rates are balanced.

The situation in Southeast Europe is a lot more balanced. There inflation is not that high, but neither are interest rates and the two are much more in balance, which should allow for faster growth. However, the heatmap also shows that the situation has changed rapidly in the last two months as inflation surges and takes these countries into the red zone, where inflation is much higher than the policy rate.

But the real surprise is in Central Europe, which is a rash of red. Policy rates are all close to zero in Central Europe, but this means the region is more sensitive to even relatively small increases in inflation. The heatmap suggests that central banks in the region have been slow to raise rates but the pressure to tighten monetary policy has now grown irresistible – especially in the last month as all the countries in the region are now deeply into the red. The Hungarian central bank is expected to raise rates on June 22 – making it the first in the European Union to do so since the outbreak of the pandemic – and analysts anticipate the Czech National Bank will follow on June 23.