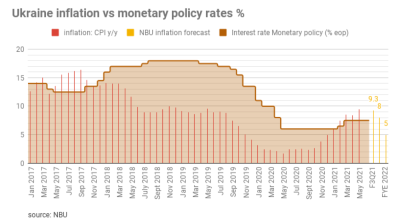 The National Bank of Ukraine (NBU) defied market expectations for a 100bp rate hike by keeping its prime lending rate on hold at 7.5% despite the fact inflation rose to 9.5% in May. / bne IntelliNews
By bne IntelliNews June 17, 2021

“The Board of the National Bank of Ukraine has decided to keep its key policy rate at 7.5% per annum. At the same time, the regulator is gradually phasing out the use of its anti-crisis monetary tools, which will enhance the effect of previous key policy rate hikes and contribute to lower inflation,” the bank said in a statement.

The central bank was widely expected to hike rates aggressively to tackle inflation and its previous governor Yakiv Smolii earned a reputation similar to Central Bank of Russia (CBR) Governor Elvira Nabiullina for inflation fighting and a conservative monetary policy.

Economists surveyed by Bloomberg had predicted an increase to 8% after Ukraine saw its inflation become Europe’s second-fastest behind Turkey.

“Big surprise this for me. After the really disappointing inflation print last month I would have said a hike in the base rate by at least 100bps was a slam dunk,” said Tim Ash, senior sovereign strategist at BlueBay Asset Management.

“Inflation is at 9.5% and policy rates only at 7.5%, that is a big negative rate differential in an environment when the market seems to be becoming increasingly focused on higher US rates and inflation,” Ash added.

Inflation has been rising across the region since the start of this year, largely driven by rapidly rising food prices, as bne IntelliNews explored in its DATACRUNCH deep dive into inflation in May.

The NBU was the first out of the gate and the first central bank in the Commonwealth of Independent States (CIS) to hike in March (50bp) and then again even more aggressively in April (100bp) as inflation continued to climb stubbornly. It was the NBU’s commitment to bring down inflation that persuaded analysts it would hike again this month.

The return of inflation has been a disappointment for the NBU, which had successfully brought inflation down to post-Soviet record lows in 2019 and 2020, reaching a nadir of a mere 1.7% in May last year, that allowed the NBU cut a full 12% off rates in a little more than a year.

Now inflation is back at a two-year high and the easing cycle in the entire region seems to be definitely over. In May inflation exceeded the expectations of both analysts and the central bank.

Food prices are predicted to retreat in the coming months as the summer gets underway. The conclusion of a new standby agreement (SBA) with the International Monetary Fund (IMF) would also help by bringing in funds that will allow the hryvnia to strengthen, which has a disinflationary effect, but that still seems a remote possibility at this point. Nevertheless, the currency has gained 5.3% against the dollar this year reports Bloomberg, making it one of the world’s top performers.

“As before, the primary assumption of the NBU Board is that Ukraine will continue to co-operate with the IMF,” the NBU said.

The NBU justified its decision by saying that it doesn't see any underlying inflationary pressures and hence no need to hike rates, suggesting the previous 100bp hike has had its affect and has already turned the tide.

“Although remaining high, inflation expectations of businesses and households have stabilised over past months,” the bank said in a statement. “In May, inflation accelerated more than forecast by the NBU. This was driven mainly by an increase in prices for some highly volatile consumer basket components, which was caused by short-term factors.”

The NBU said that the acceleration in prices, especially the appreciation of global commodity prices, has been driving up Ukraine’s prices. The bank also pointed to the low base effect from last year’s record-low levels of inflation as artificially pumping up their year’s results and making inflation look more dramatic in May than it was in reality.

“Core inflation also increased in May, to 6.9% year on year, mostly on the back of higher prices for sunflower oil and oil-based foods. However, currently no signs of an increase in underlying inflationary pressures above the forecast are observed,” the NBU said.

The central bank said that it anticipates inflation remaining elevated in the coming months, due to “temporary factors,” but that pressures will ease after that, especially on the supply side, and the low base effects will also fade away. Inflation will start to decelerate already in Q4 2021 and will return to the 5% target in H1 2022, the NBU predicted.

“Maybe the decision to stay pat on rates reflects the strength of the UAH, with the NBU accumulating reserves again recently, and perhaps the administration now wants a weaker currency to kick on with growth,” says Ash. “There is a sense also that the Zelenskiy administration is pulling away from IMF conditionality so maybe the changes in NBU management made over the past year are finally coming home to roost with a pro-growth agenda being rolled out.”

Russian economy stable in May, but demand and income contraction deep
20 hours ago
CEE Economic Sentiment Indicators fall on polycrisis woes
1 day ago
Europe’s gas storage on track to meet 80% full by start of heating season
2 days ago
Kosovo’s population dropped to 1.77mn in 2021 as emigration outweighed natural increase
2 days ago
North Macedonia’s PPI jumps 21.7% y/y in May
2 days ago