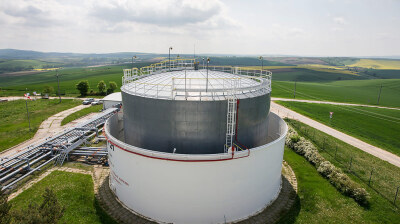 Czech billionaire Karel Komarek, owner of the investment company KKCG group, said he is seeking to cut his links with Russian energy giant Gazprom due to Russia´s invasion of Ukraine, according to Bloomberg.

Komarek said he has been in discussions with the Czech government about how to remove Gazprom from the longstanding gas storage joint venture between his oil and gas production company MND (Moravske Naftove Doly) and Gazprom Germania.

According to one bne IntelliNews source, the government is examining whether it can somehow seize or at least freeze Gazprom's shareholding. Gas storage has become an even more strategic business since the EU agreed this month that member states should bring gas storage levels up to 90% capacity by the start of this October to prepare for the coming winter, so that the bloc is not so dependent on flows of Russian gas.

The joint venture was created in 2013, to build an underground gas storage facility in Damborice, South Moravia for CZK2.5bn (€100mn).

"Gazprom is a strategic partner for us. We highly appreciate creating a joint venture with one of the largest companies in the world. In the future, we are planning further joint projects not only in the Czech Republic, but also in Europe and the Russian Federation," said Komarek back in 2013.

Now after the Russian attack on Ukraine he is considering his position: “There are very few options to fully divest from Russian gas in Eastern Europe … What we want to do is free ourselves from Russian involvement without putting ordinary Czech citizens at risk, in the middle of winter,” said Komarek, according to Bloomberg.

In an open letter, Komarek has also condemned Russia’s actions in Ukraine and listed his support for Ukrainian refugees.

"It is a senseless act of aggression that must be condemned in the strongest possible terms, and we are doing all we can to support the brave Ukrainians impacted by the barbarism of Vladimir Putin’s regime," Komarek was quoted by itv.com as saying. "I took the decision many years ago to divest and exit from Russian assets with the exception of a shareholding in a gas terminal which we have been trying to exit for a number of years and a 50/50 joint-venture with Gazprom on an underground gas storage facility in the Czech Republic," he added.

In spring 2021, Gazprom further strengthened its links with MND when its local affiliate Vemex agreed to buy most of the gas produced by MND. MND, which is co-owned by E.ON Ruhrgas, KKGC, Slovakia´s Slovensky Plynarensky Priemysel and Gaz de France, kept a few percent of the production it needed for its own operations.

Vemex supplies gas to 12 of the 35 largest Czech companies, including PKN's Ceska Rafinerska, Vitkovice Steel, brewer Plzensky Prazdroj and Pilsen Steel. For Gazprom, this is a significant strengthening of its position on the market. In addition to supplying gas to Vemex, it also supplies RWE Transgas, which is the dominant supplier of natural gas in the Czech Republic.

Meloni won the elections, but her programme won’t make Italy the next Hungary
Germany says three out of four Nord Stream pipelines damaged beyond repair
EU prepares eighth sanction package against Russia, including oil price cap but no ban on diamond trading