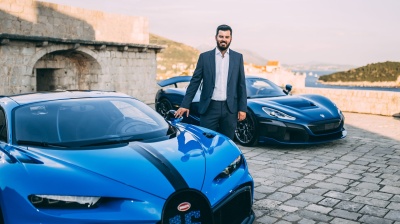 The Bugatti brand was founded back in 1909 by Italian-born industrial designer Ettore Bugatti, whose cars attained fame with their victories in the races of the 1920s, wining the first ever Monaco Grand Prix. The deaths of the founders and the destruction of its factory in Alsace in the Second World War led eventually to Bugatti ceasing operations, until the brand was revived by Volkswagen in 1998. Rimac Automobili, by contrast, burst onto the automotive scene when it was founded by youthful Croatian entrepreneur Mate Rimac, who famously started out by converting his BMW to run on electricity in his family’s garage.

“Rimac’s distinctive agility, technical expertise and relentless innovation in the [electric vehicle] EV sphere, along with Bugatti’s 110-year heritage of design and engineering some of the world’s most iconic hypercars, are now combined in the leading hypercar company,” a joint press release said.

German sports car manufacturer Porsche, part of Volkswagen Group, has been in talks with Rimac on a joint venture that will manage the supercar brand Bugatti for months.

The Rimac Group will be the major shareholder in Bugatti Rimac with a 55% stake. Mate Rimac will retain his shareholding in Rimac Group at 35%, with Porsche at 22%, Hyundai Motor Group at 11% and other investors at 32%.

“I am honored to be leading this new fusion of automotive minds and begin what will no doubt be a successful, revolutionary and exciting new chapter for everyone involved. I am also extremely curious to oversee the profound impact Bugatti Rimac will have on the industry, and I look forward to developing innovative new hypercars and technologies,” Rimac said in a press release.

The development, production and supply of battery systems, drivetrains and other electric vehicle (EV) components will be separated into a new entity, Rimac Technology, which will be 100% owned by the Rimac Group. Rimac Technology will remain an independent company working with many global car manufacturers.

The Bugatti Rimac company will be managed by Rimac. He will also run the Rimac Technology company.

Porsche will play a strong role in the joint company as a strategic partner and will have two managers and two members of the supervisory board.

Bugatti Rimac’s global headquarters will be at Rimac’s current base on the outskirts of Zagreb, Croatia, but in time will transition to the recently announced €200mn Rimac campus, which should be opened in 2023.