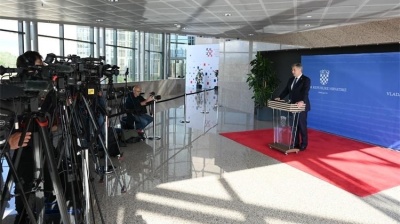 Prime Minister Andrej Plenkovic says he is "disgusted" with the failure of INA's Croatian board members to resign. / vlada.gov.hr
By bne IntelliNews September 19, 2022

Croatia’s Prime Minister Andrej Plenkovic said on September 19 that he will sack the Croatian members of oil and gas company INA if they do not resign after a major embezzlement scandal at the country’s oil refinery.

The Croatian government, which is one of the two main shareholders in the refinery along with Hungary's MOL, decided after the scandal broke that the entire management must be removed.

After a meeting with MOL executives in Zagreb earlier in September, Filipovic said all members of the board had lost the confidence of the Croatian government.

Since then, however, there has been no move by the Croatian board members to step down.

Plenkovic said on September 19 that he was  “disgusted that not one of the [Croat] members of INA’s management has said anything over the past four days”, and confirmed that they will be fired if they refuse to voluntarily resign.

"I will repeat that I immediately called the entire board of INA to account, especially the president of the board … the Hungarian and Croatian members. This means resignations,” Plenkovic said in response to a journalist question, a government statement said.

"The Hungarian side understood well the clarity of the message we sent. Not only did the president of the board [Sándor] Fasimon resign, the other two members of the management board did too. We expected the same from the Croatian members of the management board. I believe that regardless of whether they knew or, possibly, were bypassed in the decision-making system, that this kind of mega affair that caused this kind of damage to the company, caused great damage to the government and political and reputational damage to all of us, is a clear enough reason that this message coming from the level of the prime minister and the minister of economy should and can be understood.”

The scandal has been embarrassing for the Croatian government as one of those arrested in August – Damir Skugor, head of INA’s natural gas retail department – is a member of Plenkovic’s ruling HDZ party.

Opposition parties in parliament called for Plenkovic's resignation, but the prime minister enjoys a comfortable and stable majority in parliament, and it seems highly unlikely that he will be forced out over the scandal.