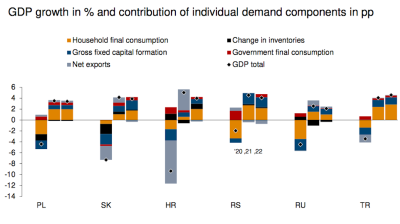 The coronacrisis in Central, Southeast and Eastern Europe is set to get worse before it gets better as most countries in the region are heading for another contraction in Q4, says a new report from the Vienna Institute for International Economic Studies (wiiw).

“One thing is pretty clear: Q4 2020 will be bad,” said Vasily Astrov, economist at wiiw and lead author of the report "No Quick Recovery in Sight, with Coronavirus Risks Looming Large" during a webinar on November 12.

As of mid-November, coronavirus (COVID-19) cases are rising sharply across most of the region, reaching exponential growth in some countries in Central Europe and the Western Balkans.

“This has economic implications because high number of cases and hospitalisations are testing the capacity of the healthcare systems to cope, which has prompted governments to re-impose lockdowns. Already in several countries in Central Europe are now under full or partial second lockdowns,” said Astrov.

“These lockdowns are not as strict as those imposed in the spring but they are still enough to push economies into recession, so we forecast double-dip recessions in almost all Eastern European countries this year.”

The new wave of the pandemic comes after, broadly speaking, the CEE region did better than Western Europe during the first wave in the spring. Most countries in the region have reported fewer deaths in proportion to their population than West European countries so far, and the economic impact of the spring lockdowns was also not so deep.

There are, however, some exceptions. First there are Croatia and Montenegro, which are strongly dependent on tourism and as a result suffered the steepest contractions in the region as arrivals slumped – by around 60% in Croatia and nearly 80% in Montenegro during the first seven months of the year.

The second group are the smaller Visegrad countries – the Czech Republic, Hungary and Slovakia – plus Slovenia, all small open economies that are highly dependent on foreign trade and highly integrated wth regional value chains. All four have substantial automotive industries and, as Astrov pointed out, "the car industry didn’t have a good time in Q2, there was a demand shock because demand for cars collapsed, and also supply interruptions within the framework of international value chains. As a result, these countries suffered over-proportionately in Q2.” 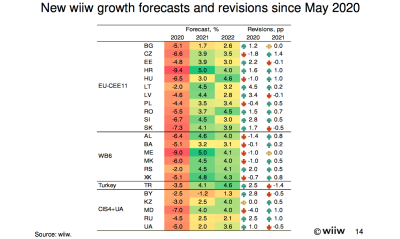 Bulgaria and Ukraine in particular can expect a “subdued” recovery, the report says, while for the major oil producing states, “in Russia and Kazakhstan, growth will barely exceed 2.5%, as the oil prices are unlikely to recover substantially from their current levels and oil production will still be constrained by the Opec+ quotas”.

This is under wiiw’s benign baseline scenario that assumes that next year there will be an effective vaccine against COVID-19 that will succeed in containing the pandemic.

Only three economies have a chance of bouncing back to 2019 levels of economic activity next year – Lithuania, Serbia and Turkey – while the rest of the region will only recover fully in 2022.

The exception to the gradual recovery forecast for most of the region is Belarus, which is forecast to be the only economy in the region that will not grow in 2021, due to the ongoing political turmoil in the country following the rigged August presidential election.

Meanwhile, Astrov stressed that there are “huge uncertainties”, mainly medical in nature, around any forecasts. He warned of the strong downward risks to wiiw’s benign baseline scenario, specifically uncontrolled spread of the coronavirus if there is not an effective vaccine, and risks related to continuation of government support measures.

The latter will remain important even under the benign baseline scenario, according to Astrov, as “it is conceivable that demand for certain types of services such as recreation and hospitality will remain depressed even in the baseline due to the psychological scars from the pandemic. Many businesses in these sectors will continue to depend on government support, which hinges on the issue of available policy space.”

There is a divide across the region. The EU member states have few problems borrowing money on the markets due to their good credit ratings, and they will also benefit from strong support under the EU’s Next Generation Programme.

On the other hand, “in some of the Western Balkans, Ukraine and Moldova, fiscal policy space may be a problem,” says Astrov. “Some of these countries already have high public debt to GDP ratios, and in these cases it is questionable whether the continuation of government measures will be possible”.

Such measures “may be even more necessary in the case of uncontrolled spread of the pandemic, and if there is a premature withdrawal of government support it will likely result in a new wave of bankruptcies, unemployment and loss of household incomes that will weigh heavily on the economies.”

The report covers 23 countries in Central, Southeast and Eastern Europe plus Turkey and Kazakhstan.