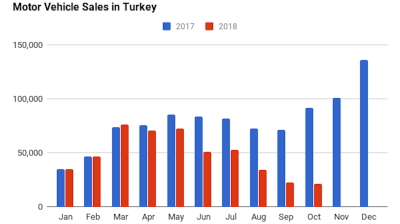 “While the recently announced tax cuts might bring some relief, we believe that the market will continue to fall in the coming months,” Vladimit Bespalov of VTB Capital Research said on November 2 in a research note.

Vehicle sales have contracted on an annual basis for seven consecutive months since April and at an escalating pace, with consumer demand in Turkey weakening as the country slips towards what might be a heavy recession.

Accordingly, VAT on commercial vehicle sales was cut to 1% from 18% and the special consumption tax levied on vehicles with engines with less than 1,600cc was cut by 15pp.

VTB’s current forecasts imply that Turkey's light vehicle sales will fall 38% y/y in 2018, although the risks remain on the downside.

Meanwhile, VTB notes potential short-term headwinds for the Tofas share price, which might result from the company's possible exclusion from the MSCI Turkey in November.

The October decline in light vehicles sales of Ford Otosan (-77% y/y) and Tofas (-77% y/y) was broadly in line with the market, while Dogus Otomotiv (-83% y/y) underperformed.

Likely focus is on margins
VTB believes that in the current environment the key players will likely focus on margins rather than volumes, but will still face challenges in shifting in full the effects of the recent lira depreciation onto consumers. “From this perspective Ford Otosan and Tofas are also better positioned, as they are local producers, although their share of FX-linked costs is still quite high and they also sell imported vehicles in Turkey.”

Dogus Otomotiv said on October 31 in a bourse filing that it signed an agreement to sell its 100% stake in its Switzerland unit D-Auto Suisse SA to Orchid Swiss Development (Pte) Ltd. ve Juglans Regia.

D-Auto operates with a paid-in capital of CHF12mn. Loussene-based D-Auto is a distributor and service provider for Porsche in Switzerland.

Tofas was to suspend production at its Bursa plant for nine days in October given the contraction in demand seen in its domestic market, the company said on September 26 in a bourse filing.

Recently, Tesla reportedly pulled the handbrake on a plan to expand into Turkey with stores and service centres due to new trade war tariffs.

Across January-September, total vehicle production in Turkey declined by 5% y/y to 1.17mn units while export revenues rose by 13% y/y to $24bn despite a 1% y/y decline to 972,208 units in sales abroad, data from the Turkish Automotive Manufacturers’ Association (OSD) showed on October 12.

Turkey's consumer sentiment index fell by another 3% m/m to 57.3 in October, marking the lowest level seen since December 2008, data released by TUIK showed on October 23.

Nato nerves on edge as France pulls out of sea operation in major row with Turkey over Libya
Turkey hit by VW’s scrapping of auto plant plan and refusal by Europe to list country as safe for tourism
Turkey’s Akbank sells $500mn of 5-year eurobonds at 6.80%