COMMENT: Are Austrian stocks still a play on Emerging Europe?

The Vienna Stock Exchange has still the highest correlation with Central and Eastern Europe (CEE) equity markets among all Western European equity markets. This is the main explanation for the ATX’s dire performance since the beginning of 2013. The market’s overall exposure to CEE has weakened over the past seven years, but remains high. Therefore, any rebound – if there is one - will likely happen only together with a recovery in CEE equity markets.

Since the beginning of 2013, the Austrian stock market has been the worst performing among its Western European peers. The ATX gained just 6% last year, while the EuroStoxx 50 advanced 18%. This year as well the performance has been lacklustre (-2.5% to mid-May 14 versus a 3% gain of the EuroStoxx 50).

Apparently, the Vienna Stock Exchange continues occupying the middle ground between Western and Eastern Europe not only in geographical but also in performance terms. Over periods of 1, 3, 5 and 10 years, the performance figures of the ATX always came in between those of western and eastern European markets. Only over 15 years, Austrian stocks outperformed both western and eastern peers, because of the market’s resilience in 2000 to 2002, when stock indices globally almost halved. 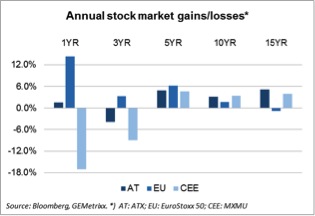 In an attempt to quantify the market’s dependence on CEE, we looked at the exposure of Austria’s listed corporate sector to the region (incl. Russia and Turkey) in terms of their top-line (for non-financials) or assets (financials incl. property stocks). Based on company data and - where necessary - our estimates and applying market cap weights shows that 37% of the market’s total capitalization is linked to companies’ domestic business, while 29% can be attributed to business in CEE. Western Europe accounts for 24% and 11% are linked to business in the rest of the world. These figures imply that the market’s exposure to CEE is higher than to Western Europe, which mainly reflects the business focus of Austria’s financial sector. Banks, insurers and real estate companies, on average, perform more than 50% of their business in or related to CEE, while for non-financials the corresponding figure is 13%. 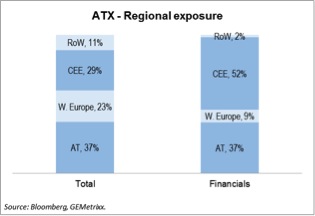 The overall CEE exposure is still substantial, but has come down in recent years. In a similar exercise performed at the end of 2007, the market’s CEE exposure was 37%, while the exposure to the domestic economy was 31%. In a way, the weights of the domestic and the CEE business have reversed since then, while the impact of Western Europe and the rest of the world remained broadly unchanged. The relative decline of the market’s CEE exposure - against the author’s expectations more than six years ago – has had two main reasons: First, many companies refocused their operations during and after the financial crisis in response to economic or political developments in CEE. For example, banks started retreating from Ukraine even before the current crisis, and they also limited their Hungarian exposure in response to regulatory assaults. In addition, property companies have expanded mostly in Germany rather than in the neighbouring east as planned before the crisis. Also non-financials - eg. Wienerberger, Verbund, Voestalpine – changed their international expansion strategy and cut back their business plans in CEE. Second: Many of the companies with a high CEE exposure underperformed the broader market in recent years - most notably RBI and Wienerberger – and others like Strabag dropped from the main index. Therefore, the weight of stocks with a high ‘CEE-beta’ declined. 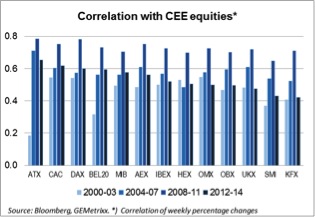 Therefore, the Austrian equity market still offers the best exposure to CEE for those investors, who cannot directly invest in the region, eg. fund managers who can only have euro risk. In contrast, for EM investors, there is no reason to have an Austrian allocation as such, because they can get CEE exposure directly. However, single stocks with a significant CEE business could be attractive on valuation grounds or because they offer exposure to a sector that is not well represented on local stock exchanges in the region (VIG in the insurance would be a case in point, because with Warsaw-listed PZU there is only one large local insurer in CEE).