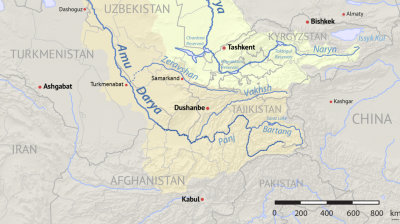 Once again there have been reports about violence along the Uzbek-Afghan border and, once again, the Uzbek authorities have downplayed any significance to what happened.

On August 21, a group of Afghans in boats landed at Aral Paighambar, Prophet Island, located in the Amu-Darya, the river that forms the border between Uzbekistan and Afghanistan. The Afghans were there to pick licorice plants, but the island belongs to Uzbekistan.

Uzbek border guards went to investigate and detain the trespassers. What happened next is not so clear.

The border guards’ Telegram channel, Sarhad.uz, said on August 22 that the trespassers “offered resistance” to the border guards, and 24 Afghans were “detained to establish their identity and conduct an investigation”.

The last sentence of the Sarhad Telegram post said, “Currently, the territory of Aral Paighambar is under the complete control of Uzbekistan’s border forces.”

That same day, Afghan media outlet Tolo News reported on how “[t]he conflict between the Taliban and the Uzbek border forces left casualties”.

On August 23, Uzbekistan’s Foreign Ministry posted about the incident on Aral Paighambar on its Telegram channel, saying that Uzbekistan “expresses its condolences to the families of the people who were killed and is providing essential medical treatment to the six people wounded.

The Foreign Ministry post also mentioned that there was a meeting of representatives of the two countries and they agreed “there were isolated violations on both sides that led to tension in the area”.

The Uzbek media outlet kun.uz referred to information on social networks that said Uzbek border guards opened fire on the Afghans on the island “after which members of the Taliban landed on the island and took control of it”.

That probably explains why the Uzbek border guards included the line about Aral Paighambar being under their “complete control”, though it does not refute the claim that the Taliban might have been temporarily in control of the island.

The elusive truth of what happened on Aral Paighambar on August 21 will probably not be clear to the public anytime soon.

Since April, there have been several incidents along the Uzbek-Afghan border that Uzbek officials in particular seemed to want to move past quickly.

On April 18, the Islamic State of Khorasan (ISK) militant group, which is fighting the Taliban in areas of northern and eastern Afghanistan, claimed to have launched 10 rockets from Afghan territory at an Uzbek military base in Uzbekistan’s border city of Termez.

But it was true. A Taliban official across the river confirmed that ISK attempted to fire rockets at Uzbekistan but said all of the rockets exploded in Afghan territory.

Despite presidential spokesman Asadov’s denial, Uzbekistan’s military seemed aware that there was an attempted attack. Residents of Termez said they saw military helicopters and warplanes over the city on the day of the botched ISK attack and for several days after Uzbek military aircraft were overhead, patrolling the area.

A video posted by RFE/RL’s Uzbek service on July 5 showed that there was in fact damage to several homes in the Majnuntol neighbourhood of Termez.

Of the five Central Asian states, Uzbekistan has by far the best relationship with the Taliban. There are practical reasons for Uzbekistan wanting to have an understanding with the militant Afghan group, firstly because the Taliban have pledged to prevent any group from using Afghan territory to launch attacks on Afghanistan’s neighbours.

Clearly, the Taliban are having difficulties keeping that promise as the two attacks attempted by ISK on Uzbekistan (as well as one on Tajikistan in May) demonstrate.

But secondly, Uzbekistan wants to open a trade route to Pakistan and India and needs stability in Afghanistan to achieve this goal. The Taliban also want the trade route as they would make money in transit fees, particularly if a planned railway line linking Uzbekistan and Pakistan, via Kabul, is ever built.

So it is not surprising that nobody wants to talk about what happened on Aral Paighambar on August 21, or even clarify whether it was Afghans or Uzbeks, or both, who were killed and wounded.

But it is also not reassuring to know that neither the Uzbek or Afghan side has been, or likely will be, willing to provide credible information on reports or rumours of violence along their common border.