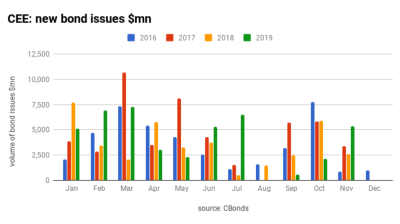 2019 was a decent year for bond issues in Central and Eastern Europe (CEE), but still behind the vintage year of 2017.

There was almost no activity in December 2019 with one bond issued in Central Europe: a $50mn bond that matures in 2024 with a coupon of 5.25% issued by Turkish bank Garanti.

Likewise in the Commonwealth of Independent States (CIS) there was only one active player, the up-and-coming investment bank BCS Global Markets that issued a total of seven small bonds worth collectively $51mn. BCS GM has been funding its business all year with constant issues of small bonds each month, ranging from between $2mn to $15mn.

In Central Europe the issues were fairly evenly spread out over the year, with February, March, June, July and November being the most active months

In Eastern Europe the activity was more volatile with March seeing almost a quarter (22.6%) of the whole year’s issues when the Russian government tapped international markets with a $3bn Eurobond. However, June, September and October were also active months accounting for 15-17% of the whole year’s activity as Russia’s leading corporate followed the state into the market.