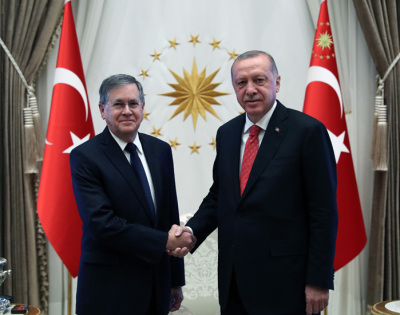 US Ambassador to Turkey David Satterfield (left) presenting his credentials to Erdogan on August 28.
By bne IntelliNews August 29, 2019

Those witnessing Turkish President Recep Tayyip Erdogan’s “unquenchable thirst for absolute power and total disregard for a rules-based governance” and asking “Will it ever end? And how would it end?” should realise that “after almost nineteen years in power, it is doubtful that Turkey’s president would relinquish power without a fight. Regardless of the consequences for his country.”

Pierini writes: “At this juncture in President Recep Tayyip Erdogan’s political trajectory, there is no reason for him to alter the political system he has so energetically forced upon his party and the entire country.

“Seen from Brussels, the string of political decisions taken by the Turkish regime since 2017 illustrates two fundamental realities. First, that Erdogan has realized that the EU model of governance is a hindrance to his quest for absolute power. (Recurrent statements about the EU aspirations of Turkey therefore have a paper-thin credibility.)

“Second, that he has found comfort in his relationships with strong leaders with worldviews that are in sharp contrast to the established Western, or EU, order: Russia’s Vladimir Putin, China’s Xi Jinping, Hungary’s Viktor Orban, and even the United States’ Donald Trump. As long as Erdogan can juggle deals with Russia (at the price of heavy contradictions), China (at the Uighurs’ expense), and the United States (with the risks associated with Trump’s unpredictability), he is likely to stay the course.

“Reasons for a change of course and a return to a decent level of rule of law can only be found in the domestic arena: discontent with an absurd economic policy, the rise of strong opposition figures, or a partial breakup of the ruling AKP.”

Recalling how complaints from opposition parties of voting irregularities in the referendum were promptly dismissed, Pierini observes how the government then forged ahead with the March 2019 municipal elections “largely presented as a presidential referendum of sorts”.

“Much to its surprise, the AKP suffered a severe blow, losing not only several major cities but also the iconic post of mayor of greater Istanbul, once the launching pad of Erdogan’s political career in the mid-1990s,” adds Pierini. “Even worse, utterly displeased by the Istanbul loss by the slimmest of margins (14,000 votes out of 8.5 million votes), the leadership engineered a rerun of the Istanbul vote. On June 23, it lost again—this time by a crushing 806,000-vote margin. Strikingly, the quest for absolute power led to absolute miscalculations.”

Erdogan has lately been busy removing the democratically elected pro-Kurdish mayors of three cities and replacing them with government appointees, presenting the move as part of the fight against Kurdish terrorism. “International criticism doesn’t matter much here. What’s significant is that Turkey’s leaders are still a long way from making peace with the Kurds, who make up 20 percent of the country’s population, after Ankara scrapped a reconciliation process in 2015,” the visiting scholar notes.

“Judicial farces”
He also observes: “Furthermore, in Turkey’s current concept of governance, power wouldn’t be absolute if there was dissent in civil society. This is why the independent media has virtually disappeared from the scene and why judicial farces such as the Gezi trial are held despite entirely baseless indictments.”

Pierini also looks at recent controversial developments at Turkey’s central bank, writing: “Another pillar of Turkey’s rule-of-law architecture was recently dismantled: the independence of the Central Bank. Not only was the bank’s governor dismissed by presidential decree on July 6, but nine of the institution’s top managers—those people guaranteeing its professional credibility in international circles—were also dismissed a little later.

“The implications of this latest move are tragically simple: international financial markets and investors, on which Turkey is heavily reliant, will once again lose confidence in the country’s economic reliability. The central-bank episode illustrates the unavoidable linkage between rule of law on the domestic scene and international credibility.”

As for Turkey’s military moves in Syria, Pierini says the “official motive for such military operations is the fight against terrorism, but the government’s domestic motivation to ramp up its nationalist narrative is never far from the surface. The policy of returning irregular Syrian refugees has similar motivation”.

As for Turkey’s military moves in Syria, Pierini says the “official motive for such military operations is the fight against terrorism, but the government’s domestic motivation to ramp up its nationalist narrative is never far from the surface. The policy of returning irregular Syrian refugees has similar motivation”.

Turkish President Recep Tayyip Erdogan’s stated goal to end all of Turkey’s dependency on foreign suppliers for building weapons by the country’s centenary in 2023 is in no way realistic, ... more

Greek daily Kathimerini has reported military sources in Greece as saying that if cables of the ... more