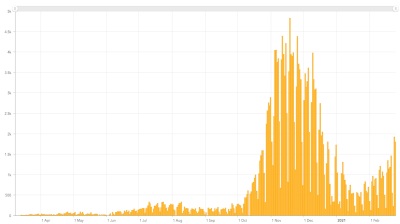 Bulgaria’s government decided on February 24 to reopen restaurants, bars and cafes on March 1 and night clubs on April 1 despite the constantly rising number of new coronavirus (COVID-19) cases, it said in a statement.

Prime Minister Boyko Borissov said earlier in February that they would be reopened even though experts warned that the country is at the beginning of a third wave of the pandemic.

His move was widely expected as his party is facing the toughest general election in its history on April 4 with polls showing that, although the party is expected again to get the biggest share of votes, it will struggle to form a ruling majority in the fragmented new parliament where five or six parties are expected to pass the threshold.

The government explained its decision with the increasing number of vaccinated people and of those who have recovered from the coronavirus. It claimed that nearly 150,000 people have received the shot, while 200,000 have recovered.

“With this pace of vaccination and with this shield of 350,000 people, which we have in front of the pandemic, on March 1 restaurants and gambling halls will be opened and on April 1 night clubs will start work,” Borissov said in the statement.

His claim provoked controversy as 150,000 people have received only the first doze of the vaccine and just few dozens have the two dozes. Also, experts suspect that the number of infected and recovered persons cannot be known as many people choose not to report they have the symptoms of coronavirus to the authorities.

Borissov unexpectedly abandoned the vaccination plan and on February 19 announced the start of mass immunisation. Thousands of people formed huge lines, waiting in front of hospitals to get the shot.

Meanwhile, on February 24 the number of new cases was 1,800 and on weekly basis they have risen by 37%. Most areas in the country entered in the red zone as the share of infected persons has increased above 120 per 100,000 people.

EU downgrades its estimate of Russian troops on Ukraine’s border to 100,000 but tensions remain high
1 minute ago
PM scandalises Bulgarians by wearing skimpy shorts to present new government
49 minutes ago
Strong hopes Georgia's political crisis is over after EU brokered agreement
8 hours ago
Bulgaria’s outgoing government under scrutiny over sudden hike in budget deficit
19 hours ago
Team Navalny pulls the trigger on the next big demonstration scheduled for April 21
23 hours ago