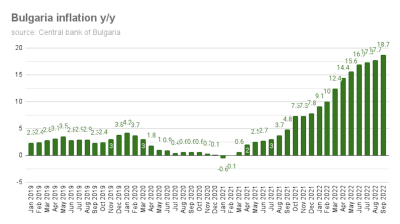 Bulgaria’s consumer prices increased by 18.7% y/y in September, after rising by 17.7% y/y in August, reaching the highest level since July 2008 (chart), the statistics office reported on October 17.

Inflation has been rising for 19 consecutive months but started speeding up in the past several months due to surging energy prices. It reached a nine-year high in September 2021, going up by 4.8% y/y, and continued climbing in the following months, accelerating after the start of the war in Ukraine.

The consumer price index (CPI) moved up 1.2% month-on-month and was by 14% higher from end-December, the National Statistical Institute (NSI) said in a statement.

The Harmonised Index of Consumer Prices (HICP) increased 15.6% y/y in September, after rising 15% y/y in August. The HICP was up 0.7% m/m in September.