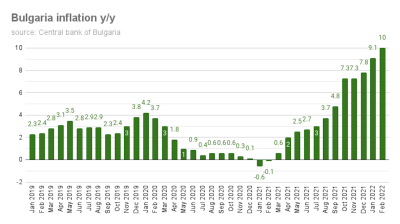 Bulgaria’s consumer prices increased by 10% y/y in February, after rising by 9.1% y/y in January, statistics office reported on March 15.

Inflation started rising more significantly in the past several months, affected by high energy prices. It reached a nine-year high in September, going up by 4.8% y/y, and continued climbing in the following months.

Compared to the previous month, prices of restaurants and hotels increased the most, by 4.2%, while clothing prices dropped by 2.8%.

The Harmonised Index of Consumer Prices (HICP) increased 8.4% y/y in February, after rising 7.7% y/y in January. The HICP was up 2.4% m/m in February.