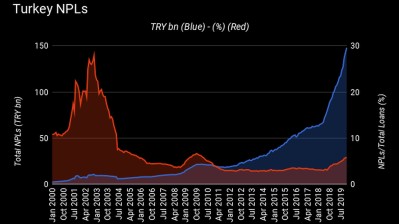 Turkish conglomerate Sabanci Holding’s Akbank (AKBNK) has said it expects its non-performing loan (NPL) ratio to come in at below 6% in 2020, while the bank is simultaneously targeting the high 10%s in annual lira-denominated loan growth, according to a January 8 stock exchange filing.

Akbank’s FX loans growth for 2020 is seen by the lender as heading for the low single digits while its swap-adjusted net interest margin (NIM) is forecast at above 4%.

The private bank is also targeting a return on equity (ROE) in the mid-10%s for 2020 thanks to high single digit net fees and commissions growth.

“Akbank announced its 2020 budget with the full attendance of its upper management as always. In the 2020 budget, we see minor differences to our forecasts, which mainly derive from a stronger 4% GDP growth forecast [for Turkey] compared to our 3% estimate,” BGC Partners said in a note entitled “AKBANK 2020 BUDGET: Guiding for mid-teens ROE, broadly in line with expectations”.

Akbank’s NPL ratio stood at 6% as of end-September. That was versus 2019 guidance for "lower than 6%", according to the lender’s latest financials for Q3 2019.

Another Garanti BBVA target is a return on average equity (ROAE) of 15-18% for 2020 on net fees and commissions growth in the high 10%s.

“Some optimism generated in Istanbul by the capital [markets] days held respectively by AKBNK and GARAN. There's not a lot to choose between Turkey's two largest private banks given the quality of [management], the experience, the franchise and so on but the reservations about both are related to the mismanagement of the economy not the banks. If one feels comfortable with Turkish macro and geopolitical risk you can buy both but if that wonky economic stewardship precipitates another currency crisis then both are vulnerable because foreigners own a lot of them. Both are guiding above consensus for ROE, mid teens or so, and downplaying NPL concerns. If things settle in the Middle East and the CBT [Central Bank of Turkey] avoids an abortive rate cut next week, these would be the first stocks to buy. Until then I'm cuddling [soda ash producer Soda Sanayi] SODA, [ready-wear maker Mavi Jeans] MAVI, [retailer Migros] MGROS and also casting an inquisitive glance towards [carmaker Ford Otosan] FROTO, which is cropping up as an idea for FY20,” Julian Rimmer of Investec said on January 8 in an emailed note to investors.