Directors resign from board of Ukraine's gas monopoly over derailed reforms 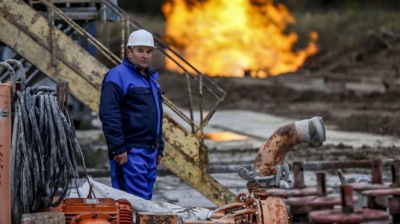 Donors are raising concerns over the government’s commitment to cleaning up corruption in big state-owned enterprises.
By Sergei Kuznetsov in Kyiv September 20, 2017

The two surviving independent members of the supervisory board at Ukraine's gas monopoly Naftogaz - Paul Warwick and Marcus Richards – quit on September 19, citing "the government’s lack of commitment to duly implement the corporate governance reform", the company said in a statement. The other independent directors have all already quit, raising concerns by donors over the government’s commitment to cleaning up corruption in big state-owned enterprises.

According to a letter signed by Warwick and Richards, they made it "very clear" to the Ukrainian government in April that their continuing involvement in this critical reform project was contingent on material progress on corporate governance.

"Despite assurances from senior politicians, deadlines have passed and commitments have not been delivered with an environment of government control, not envisaged in the corporate governance action plan," the letter reads. "Increasing political meddling becoming increasingly evident and, unfortunately, the norm. Essentially, no material change has occurred over the last five months despite the assurances we received to the contrary."

In April, the four independent board members – Paul Warwick, Markus Richards, Charles Proctor and Yulia Kovaliv – sent a letter to the Ukrainian government indicating their concerns over the situation in the company. Without material progress it would be "inappropriate and untenable" for them to continue as supervisory members, they said in the letter.

Specifically, the independent board members demand the "resolution of issues" related to the electronic declarations system of Ukrainian officials. According to recent amendments to Ukrainian legislation, financial disclosure obligations have been extended to existing and potential members of supervisory boards of state-owned companies. "It is impossible for foreigners to complete necessary actions with such inaction leading to potential criminal claims against us," the independent board members wrote.

The European Bank for Reconstruction and Development (EBRD), Naftogaz's main international partner and donor, has warned Ukraine’s leadership that the possible collapse of the country’s energy sector reform could shatter international confidence in the current government in Kyiv.

Specifically, Sir Suma Chakrabarti, the president of the EBRD, warned the Ukrainian leadership of negative effects from the threatened resignation of the independent board members of Naftogaz.

This move might not only "severely damage" the company at a time when its transformation is finally beginning to take hold, but could also "shatter the international confidence in your government’s commitment" to reform and restructure Naftogaz and other state-owned enterprises in Ukraine, said the letter published by bne IntelliNews.

Sir Suma was in Kyiv for a conference last week and followed up with awarding Kyiv poor marks in its progress report, saying, “Ukraine just does not have the luxury of further delaying the reforms".

Among the major Naftogaz and EBRD demands to the Ukrainian government, was an approval of the company’s financial plan for 2017 and performance indicators for Naftogaz supervisory board. The monopoly's financial plan prepared according to international standards was agreed by the company’s  board and submitted to the Ukrainian cabinet for approval in April.

According to Ukrainian media, the Ukrainian government greenlighted the draft financial plan for Naftogaz in July. However, a Kyiv source with knowledge of the matter told bne IntelliNews that the government failed to implement all necessary procedures necessary for approval and further implementation of the above mentioned documents, which also triggered negative reactions from the EBRD.

The current crisis is also undermining possible further cooperation between the Ukrainian government, Naftogaz and the EBRD over multi-million funding to Kyiv for natural gas purchases.

"The latest support programme included a $300mn loan facility provided by the EBRD for Ukraine’s gas purchases from European suppliers. Currently, Naftogaz sent signals that it wants to extend this cooperation. They was intended to negotiate a new $1bn loan for gas purchases," the source told bne IntelliNews.

Recently, the government in Kyiv also refused to increase the price of gas for the country's households from October 2017 by 18.84% or UAH931 per 1,000 cubic metres (cm) to UAH 5,873 without VAT. The hike was in line with demands of the International Monetary Fund (IMF), and was necessary for the improvement of Naftogaz's financial results.