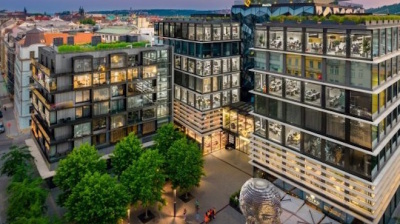 CPI's Quadro office and residential building in the centre of Prague. / CPI
By bne IntelliNews January 20, 2022

The Czech real estate group CPI Property Group (CPIPG), owned by billionaire Radovan Vitek, issued sustainability-linked bonds worth €700mn with an annual coupon of 1.75%, the first real estate company in the CEE region to do so, the company announced in its press release.

“The group was the first borrower from our region to issue benchmark green bonds in 2019 and has further strengthened our ESG agenda and capital structure through this innovative transaction,” said David Greenbaum, CFO of CPIPG.

The sustainability-linked bonds – covering wider environmental, social and governance (ESG) issues than green bonds – are tied to the company's goal to reduce greenhouse gas emissions by 30% by 2030 compared to the 2019 baseline. The bonds are subject to a step-up margin of 0.25% in the final two years if the greenhouse gas emissions intensity is not reduced by about 22% by year-end 2027. The maturity date is January 14, 2030.

In February 2021, Czech-based logistics property developer CTP issued its third green bond with a nominal value of €500mn, a coupon of 0.75% and a six-year maturity, following its debut issuance (€650mn) in September 2020. Its second, €400mn, green bond issue was carried out in November 2020. CTP’s inaugural  green bonds became the largest debut issuance by a CEE real estate company.