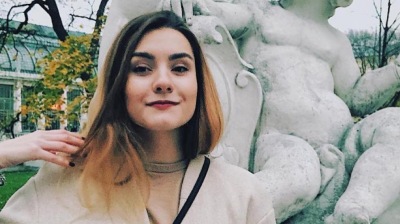 Sofia Sapega was arrested last weekend together with her boyfriend Belarusian opposition journalist Roman Protasevich after a Ryanair flight was forced to land in Minsk. She has been charged with counts of sedition and insurrection that carry lengthy jail sentences. / wiki
By bne IntelliNews June 1, 2021

Sofia Sapega, the girlfriend of Belarusian opposition journalist Roman Protasevich who was arrested after a Ryanair flight was forced to land in Minsk last week, will be tried on inciting hatred and organising mass rally charges, the country’s foreign minister told Russia’s Kommersant business daily on May 31.

Belarusian President Alexander Lukashenko forced the commercial flight down with a MiG jet fighter as it crossed over Belarusian airspace and minutes before it would have crossed into Latvian airspace. The arrest of Protasevich and Sapega on May 23 caused a storm of outrage in the EU which immediate slapped bans on overflights of Belarusian airspace and closed many airports to Belavia, the national carrier. More sanctions are in the works, according to the EU.

“Most likely, [Sapega’s] trial will take place in Belarus, given that all the information about the subversive activities of certain individuals came into our structures,” Belarusian Foreign Minister Vladimir Makei told Kommersant, as cited by the Moscow Times.

BBC’s Russian service has reported that Sapega faces three criminal charges: organising violations of public order, inciting hatred and organising mass unrest, each of which carry sentences of between three and 15 years in prison.

Her mother said in a statement to the local press that Sapega was not a dissident and was not involved in any way with the protest movement. Observers widely assume that she was arrested simply because she was accompanying Protasevich.

Both were forced to make videos while in detention confessing to their “crimes.” (Protasevich here, Sapega here.) While Protasevich played a key role in the popular uprising last summer and will also most certainly be convicted on charges that carry up to 15 years, Sapega is expected to be convicted and then deported to Russia.

She is a Russian national, but has residency in Belarus where she has lived with her mother since she was six years old.

Makei said there are “different options” for Sapega, including being pardoned or extradited to Russia.

“The decision of the head of state can be made on both pardoning and transferring to serve a further sentence in Russia. We'll have to wait,” he told Kommersant.

After initially ignoring the arrest of one its nationals, the Russian embassy in Minsk was spurred into action, as Moscow prides itself on caring for its citizens in other countries, and often this obligation to “care” is used as a pretext for political and military interference in other countries in the region. A member of the embassy was dispatched to see Sapega in prison. Russian President Vladimir Putin also brought Sapega’s case up during a meeting with Lukashenko in Sochi at the weekend. Russian presidential spokesman Dmitry Peskov said the Russian government was paying “close attention” to the case.

Sapega’s defence lawyer said she will be formally indicted on May 31, according to Russia’s state-run RIA Novosti news agency.

In related news Russian airlines began to avoid Belarusian airspace on May 31 after the EU had already advised flights from EU member states not to fly over the country.

No reason was given for the change, reported by the Russian edition of Forbes.

Russia briefly blocked planes from the EU headed to Moscow that flew around Belarus in what is seen as a gesture of solidarity with Minsk, but Peskov said the reason was technical not political. Within a few days these flights were permitted to land in Moscow as well.

The Forbes source did not specify the names of companies and directions. According to him, the companies had asked the aviation authorities in advance for the opportunity to fly around Belarus. A Forbes source in one of the largest airlines confirmed that several flights were made the day before, bypassing Belarus.

The EU has not formally banned flights over Belarus, which airlines are currently avoiding on a voluntary basis, but a formal ban maybe included in the package of harsh sanctions being prepared by the EU.

Moscow is a major transport hub and millions of Russian fly to Europe every year on holiday. Russia is nervous of interfering in these transport arrangements and an EU ban on Russian flights would be highly unpopular amongst the Russian people.