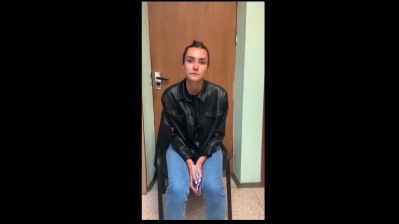 Sofia Sapega, a Russian national and partner Roman Protasevich, appeared in a video released by the Belarusian authorities where she confessed to sedition. The confession appears to have been made under duress.

“#Belarus Sofia Sapega was filmed in detention in #Minsk confessing that she is an editor of the @telegram channel "Black Book of Belarus", which reveals the information about security forces. It looks like she is repeating what she was just told to say. Chechnya-style videos,” said Hanna Liubakova, a prominent opposition journalist in Minsk.

She was arrested together with Protasevich after MiG fighter intercepted their Ryanair commercial flight and was ordered to land in Minsk on May 23. Protasevich is the former editor-in-chief of the Nexta opposition Telegram channel that played a prominent role in the mass protests that swept the country last summer.

Sapega, a 23-international law student, was travelling back to Vilnius with Protasevich where they had been on holiday and had been due to defend her Masters thesis this week when the plane was hijacked by the Belarusian authorities.

The couple are both being held in the KGB detention centre in the heart of Minsk. According to the current editor-in-chief of Nexta, Tadeusz Giczan, who spoke to bne IntelliNews earlier in the day, she has not been charged yet, as the authorities can hold a suspect for 72 hours before they have to bring charges.

The Russian embassy has requested access to the prisoner.

After initially ignoring the case, according to Nexta, the Russian foreign ministry changed tack during the day and started to go through the motions of protecting the rights of one its citizens in a jail of another country.

Russian Foreign Ministry Spokeswoman Maria Zakharova told journalists that Sapega is suspected “of committing crimes under several articles of the Criminal Code of Belarus during the period from August to September 2020.”

Zakharova added that the Belarusian authorities are holding Sofia Sapega in custody for 72 hours, after which a court ruling “will be made on choosing measures of restraint or releasing [her].”

Giczan reported that she is accused of participating in the unauthorised rallies in Minsk last August, but no details have been released. He also reported that very unusally she had been allowed a phone call with her mother.

"She was allowed to talk to her mother by phone, which is very unusual," said Giczan. "Normally once you enter a detension centre, that's it. All ties with the outside world cease."

Prior to that, Sapega had manged to get a one-word text away at the time of her arrest, saying only "mama."

"Her family tried to hire an independent lawyer but they were refused access to Sofia. She has instead been given a KGB lawyer, which is worse than none," Giczan told bne IntelliNews.

Protasevich was also in a video a day earlier and also confessed the crimes of organising mass rallies that could land him with up to 15 years in prison if convicted.

Observers say that the two confessions smack of old-school KGB tactics. Protasevich’s father claimed he had been beaten.

“It’s likely his nose is broken because the shape of it has changed and there’s a lot of powder on it,” Protasevich’s father Dmitry Protasevich told Reuters. “I think he was forced (to confess).”

Giczan also published an enhanced copy of a still from the confession video that appears to show bruising on Protasevich's neck that suggests he was tortured. 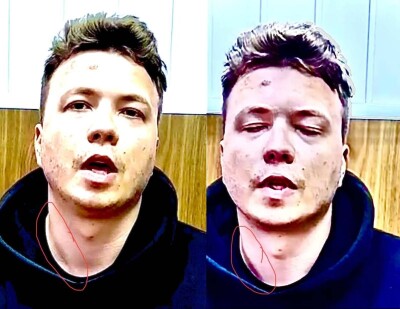 Other commentators pointed out the KGB could use the fact that they held the couple to put pressure on each of them into co-operating by threatening to hurt the other.