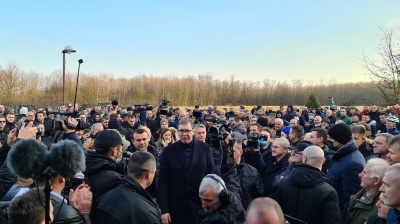 The Serbian government revoked licences for Rio Tinto’s massive lithium project just days after Australia deported Serbian tennis star Novak Djokovic. But the reasons for cancelling the project have more to do with domestic politics than the deterioration of Serbia’s relationship with Australia over the Djokovic scandal.

While recent headlines in the intentional media linked Belgrade’s decision to revoke the licences, announced by Prime Minister Ana Brnabic on January 20, to Djokovic’s detention and subsequent deportation from Australia just a few days earlier, the pressure on the Serbian authorities over the Rio Tinto project had been mounting for months.

With general and presidential elections approaching in April, the Serbian government was pushed into taking a stance against a major foreign investment project as a matter of political expediency.

Rio Tinto’s Jadar lithium project near the town of Loznica would have turned the company into Europe’s largest producer of the metal — dubbed ‘white gold’ — for a period of 15 years. Demand for lithium is set to continue increasing in the coming years as it is an input for batteries for both electric vehicles and electronic products such as smartphones. Now not only is Serbia set to lose the investment into the mine itself, it will also miss out on other industries expected to grow up around it; back in December Rio Tinto said it had invested into Slovakia-based battery technology and manufacturing company Inobat Auto and was “actively pursuing” plans to build a battery gigafactory in Serbia.

This was clearly a deeply difficult decision for a government that has had a strong emphasis on attracting foreign direct investment, which it has encouraged through subsidies and other incentives. While officials have pointed out that the original decision to allow the investment was made before the ruling Serbian Progressive Party (SNS) was in power, more recently Energy and Mining Minister Zorana Mihajlovic and others have spoken out warmly in favour of the project’s economic benefits.

The dismay that was no doubt felt in Belgrade when the government made the decision to cancel the permits was reflected in the accusations made by top officials. Mihajlovic blamed environmental movements for forcing the government to scrap the project, while Brnabic cast the blame on foreign powers, prompting the embassies of the US, the UK and Germany to issue joint statement in which they rejected accusations that they had financed the protests.

Local residents in the Loznica area and environmental groups had been raising concerns about the project for some time. While Rio Tinto and the government had said the company would adhere to the highest environmental standards, the company’s chequered history hard to ignore; in just one example less than a year ago its chairman Simon Thompson announced he was standing down over the destruction of two ancient Aboriginal rock shelters. Then in the autumn, mass protests erupted across Serbia. For several weekends running, thousands of people gathered in Belgrade and other cities and blocked major highways in an attempt to force the government to back down.

Concerned citizens were joined by opposition politicians, eager to up the pressure on the government as the elections approached. As a bne IntelliNews comment pointed out, while Rio Tinto’s history is clearly problematic, the protesters largely ignored companies that are already polluting the environment in Serbia, such as the Chinese run HBIS smelter and Serbia Zijin Bor Copper in the eastern city of Bor.

Among those to come out in support of the protesters was Djokovic, who wrote on social media of the importance of clean air, water and food, while at the same time distancing himself from the politicisation of the protests.

Serbian President Aleksandar Vucic moved quickly to make concessions to protesters in a bid to calm the situation. Yet the protests continued. And then in January Serbs — government and opposition supporters alike — were up in arms on a different topic: the detention of the world’s no 1 men’s tennis player and Serbian national hero Djokovic, who was accused of failing to comply with Australia’s COVID-19 rules when he arrived in the country to compete in the Australian Open. While the case was decided, Djokovic was placed in a refugee hotel in Melbourne — the very city where Rio Tinto had its Australian headquarters.

Top politicians, along with Serbs of all political stripes, were quick to defend their country’s sporting champion, and relations with Australia took a sudden turn for the worse. Environmental activists in Loznica even threw eggs at Rio Tinto’s information centre in the town to express their displeasure with the treatment of Djokovic.

But while the Djokovic scandal may have added to the pressure on Serbian officials to finally end the Rio Tinto saga — rather than waiting for the publication of the environmental impact assessment on the project and then holding a referendum on the topic — the primary impetus was the approaching April elections, where Vucic and the SNS want to secure reelection without an environmental scandal looming over the government.