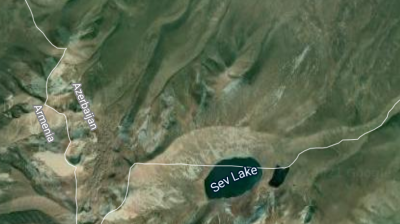 Around two-thirds of the remote lake, as shown by Google Maps, lies in Armenia. / Google Maps.
By bne IntelIiNews May 12, 2021

Azerbaijani armed forces crossed the state border of the Republic of Armenia and advanced more than three kilometres into southern Armenian territory before trying to surround the remote Sev Lich lake, Armenia’s acting prime minister Nikol Pashinian said late on May 12 following a meeting of the country’s security council called to discuss events.

“Of course, these actions are intolerable for the Republic of Armenia, because it is an encroachment on the sovereign territory of the country. The issue of why such an action became possible at all is a different subject, but it should be noted that this is a subversive penetration attempt,” Pashinian was cited as saying by Public Radio of Armenia.

He added: “The actions of the Azerbaijani armed forces were not accompanied by use of firearms or any other weapon, and they are trying to justify their actions by some maps, which we deem imaginary and false, because at our disposal we have a map approved between Soviet Armenia and Soviet Azerbaijan, and confirmed by the central government, which clearly shows where the border between Armenia and Azerbaijan passes.”

Azerbaijan’s move at Sev Lich (Black Lake), around a third of which is within Azerbaijan, might amount to some sabre-rattling as Baku tries to pressure Russia to push Armenia to speed up the delivery of concessions made in the Moscow-brokered ceasefire agreement that last November brought an end to the six-week war fought by Azerbaijan and Armenia over the disputed enclave of Nagorno-Karabakh and surrounding districts. President of Azerbaijan Ilham Aliyev has in recent weeks grown noticeably frustrated at the slow pace of progress on matters such as a proposed land corridor that would run from Azerbaijan across Armenia to the Azerbaijani exclave of Nakhchivan on the Turkish border. Close ally of Baku, Turkey, is also very keen to see this corridor materialise, given its economic and geopolitical ambitions.

Pashinian was further quoted as saying the Armenian Armed Forces had been responding to developments regarding the advance of Azerbaijan’s soldiers since early morning, making necessary tactical moves and carrying out other actions. He stressed that the current situation was unacceptable, but added that given the state of affairs, the primary plan was to resolve this issue through negotiations and diplomacy.

“I want us to make it clear that there is no way we can tolerate and come to terms with the situation; today we have to discuss the current situation and our future plans, possible scenarios, the existing internal interconnections between those scenarios. I consider it necessary to emphasise that, unfortunately, the situation also becomes a cause of internal political speculations. I would like to reiterate that no attempt should be made to use the external security situation for domestic political purposes, as this is a matter of national security,” Pashinian, who is set to contest a snap election in June, added.

He said that reports of shootings, hostilities and casualties had nothing to do with reality, but acknowledged that the situation was at least near-critical, if not critical. “And if it were not so, we would not have convened a meeting of the Security Council. In any case, in this situation we need to remain calm. On the other hand, we need to be consistent in terms of protecting our state and national interests. We also need to discuss the future steps and tools.”

On Saturday, Belarusian state media reported that Belarus’ FM Vladimir Makei had died suddenly at the age of 64. Makei was one of Lukashenko’s closest men and speculations abound as to what his death could mean for Lukashenko’s regime.

Twelve out of the 21 candidates who registered for the presidential election by the November 8 deadline were dismissed after the interior ministry reviewed the registrations, leaving all the businessmen heavyweights out of the race.