There’s a surreal moment in Cyril Tuschi's excellent documentary on Mikhail Khodorkovsky when the filmmaker actually manages to talk to the Russian oligarch through the bars of the cage he is forced to sit in each day during his trial. With courtroom guards gawping, Tuschi brazenly approaches the cage and begins asking Khodorkovsky questions, who in turn calmly replies. This is surely a breach of every court rule, yet no one seems sure of what to do, reinforcing the impression of sham proceedings that can’t quite keep up appearances.

This is cynical Russian politics at its best – or worst: a veneer of order and seriousness, but scratch the surface and underneath it’s all a bit of a cruel joke not particularly well set up nor conscientiously adhered to, whose only believers are those whose job it is to play along and those too stupid (or scared) to realise the truth.

Russia of course has a rich history of show trials, of which the two that Khodorkovsky and his partner Platon Lebedev had to endure were, in retrospect, a sign that Vladimir Putin did not intend to build a country based on liberty and the law. Since then, the regime has put on trial a dead man – murdered whistleblower Sergei Magnitsky – and most recently a man they kidnapped at gunpoint from his own country lawfully going about his business – Estonian intelligence official Eston Kohver.

Such show trials of course provide rich fodder for satirists and writers. Franz Kafka’s “The Trial” was a more general take on the faceless, capricious judicial systems of Europe, while Arthur Koestler’s “Darkness at Noon” was a more pointedly aimed arrow at the Soviet show trials. Khodorkovsky’s second trial in 2010 – he was originally jailed in 2003 for tax evasion – took the charade to a whole new level, as the charges were impossible given that he was previously convicted on tax evasion of the same allegedly stolen oil. How, asked critics, could he be in jail for evading taxes on oil he had supposedly now stolen?

During this second trial, Russian cartoonist Alexander Kotlyarov was commissioned by the Russian website Ezhenedelnyi Zhurnal to produce weekly comic strips depicting the sham proceedings – which lasted for a year and a half – in all their glory. Using a style reminiscent of Marvel comic books with sharply hued characters, angular and angry, gesticulating towards the reader and shouting through word balloons, Kotlyarov depicted the people – including the judge, prosecutors, defendants, lawyers and witnesses – and events of that second trial in all its searing absurdity. By contrast, Khodorkovsky is drawn in warmer shades and looks benign and calm, almost Buddha like. 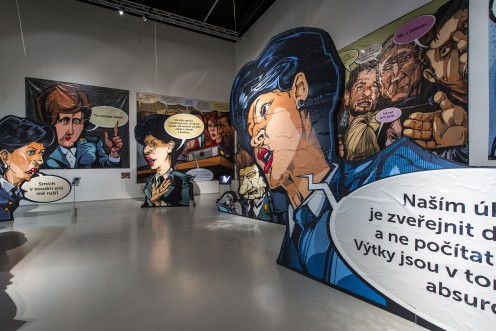 Kotlyarov died in 2014, but not before Anton Litvin, the curator of the exhibition “Trial” that is currently on show at Prague’s DOX Centre for Contemporary Art, had contacted Kotylyarov and together reproduced the images on a larger scale for exhibiting around the world (though not, it must be said, so far in Russia). “The exhibition works in two parts, bad versus good, prosecution versus defence, dark versus light,” Litvin has explained.

Wandering among the larger-than-life cut-outs, the visitor gets a feeling for both the intimidatory presence that the state can bring to bear on an individual, as well as the farcical way it often exercises that power. “Laughter in the courtroom bothers me!” shouts the judge in one cartoon; “There is absolutely no reason for you to submit an appeal, or even raise an objection about an appeal!” the prosecutor says in another; “Mikhail! Settle down! The prosecution is presenting another intriguing document… would you like to have a bite to eat in the meantime?” Lebedev says in yet another.

Leaving DOX, the major exhibition showing at the gallery is “Brave New World” – a project based on a comparison of the social models conceived by Aldous Huxley, George Orwell and Ray Bradbury in their famous dystopian visions of the future. In one exhibit – “History repeats itself, first as tragedy, then as farce” – life-sized caricatures of four of history’s worst dictators – Hitler, Mao, Stalin and Kim Jong-il – are presented on all fours, pants around their ankles, on a rotating dais. With show trials now once again a feature of Russia, such a sentiment remains reality. 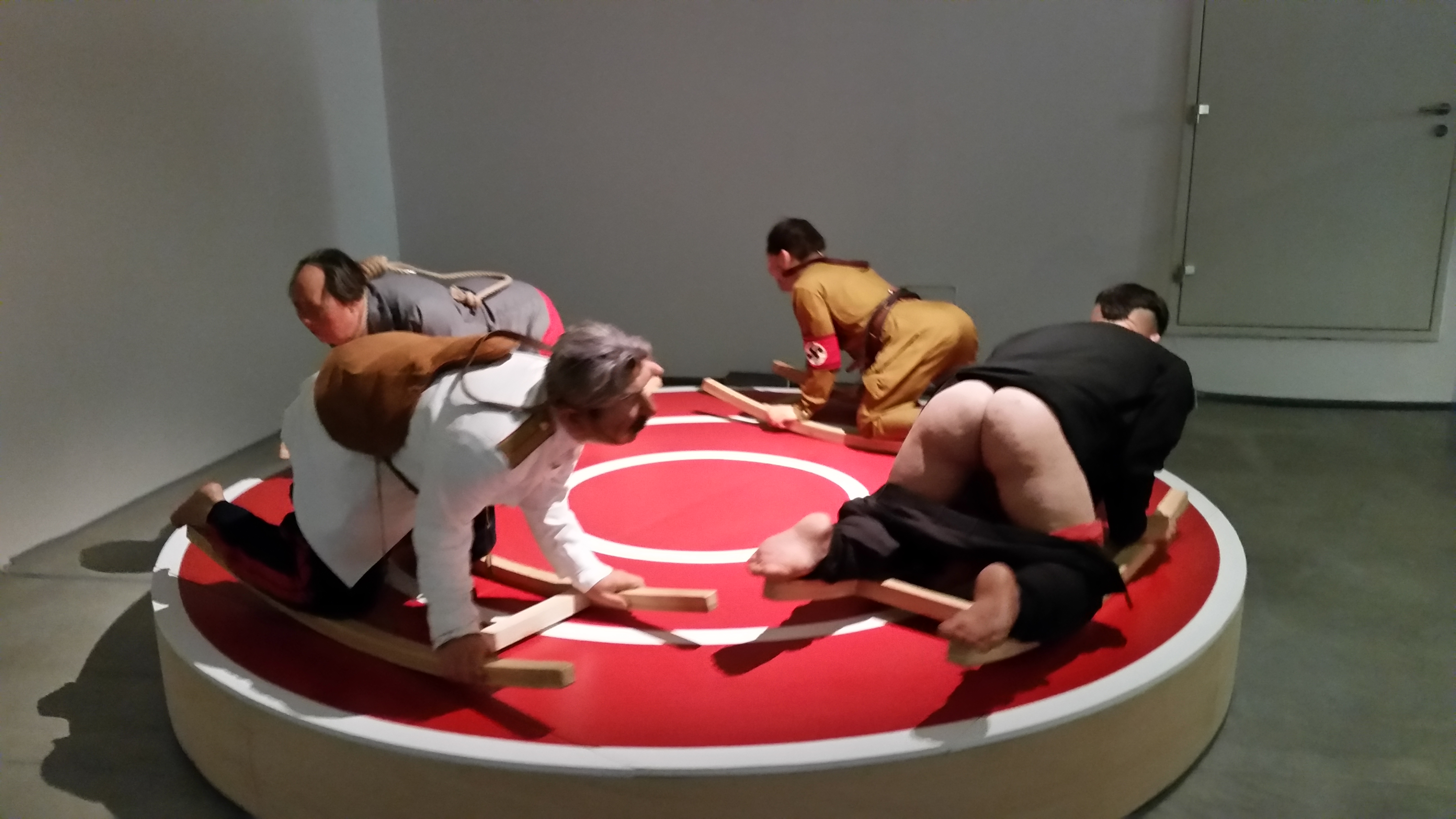