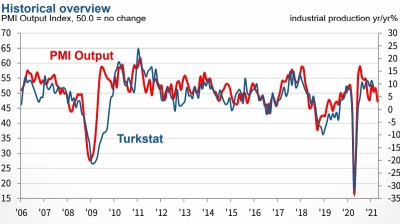 Turkey’s manufacturing purchasing managers’ index (PMI) fell to 50.4 in April from 52.6 in March as the renewed wave of coronavirus infectons hitting the country took an unmistakable toll.

Andrew Harker, economics director at PMI IHS Markit, which releases the PMI with Istanbul Chamber of Industry, said: “The impact of the current wave of COVID-19 infections on the Turkish manufacturing sector in April was clear. Output and new orders softened as customers held off on committing to projects.

“There were some positive signs, however, as both new export orders and employment continued to rise.

“Performance in the months to come will likely depend on how quickly infections come down, helping the sector to operate in a more normal environment.”

Nicholas Farr at Capital Economics responded to the PMI decline by noting higher interest rates in Turkey have also squeezed the economy. He said: “This is consistent with industrial production growth easing from around 10% y/y in Q1 to 5% y/y at the start of Q2. The fall in the PMI was driven by a decline in the new orders and output components, suggesting that recent monetary tightening and tougher virus restrictions are weighing on domestic demand.”

On the PMI scale, any figure over 50.0 signals an improvement in overall business conditions.

The reading of 50.4 meant the health of Turkey’s manufacturing sector strengthened to the least extent in what has been an 11-month sequence of growth.

IHS Markit said: “The slowdown in output ended a three-month sequence of growth, but was still much weaker than seen during the early part of the pandemic in April and May last year. The softening of total new orders was recorded in spite of a rise in new business from abroad, which increased for the fourth month running amid signs of improving demand internationally. “Manufacturers continued to expand their staffing levels in April, thereby extending the current sequence of job creation to 11 months. The latest rise was the softest in this sequence, however.”

“The rate of deterioration was unchanged from March. Rising input costs were often passed through to customers by way of increased selling prices. Charges increased sharply, and at a much faster pace than the series average.”

Russia’s industrial output decline slows to only 0.1% in August
7 hours ago
Putin's popularity remains high, but even after a hit in September it is still at 77%
7 hours ago
Russia on track to have a record-smashing grain harvest
2 days ago
Bosnia posts annual CPI inflation of 16.8% y/y in August
2 days ago
IMF sees Romania’s economy growing by 4.8% in 2022, analysts are even more bullish
3 days ago