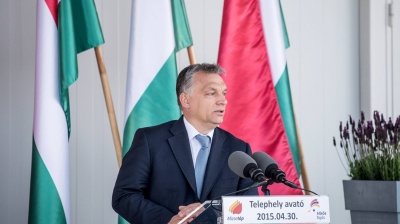 One year ago – and just nine months after a second, consecutive landslide national election victory – the Hungarian government of Prime Minister Viktor Orban was in trouble, its popularity waning in the wake of a number of controversial policy decisions: a discriminatory advertising tax had turned RTL Klub, the most popular television station, into an implacable media foe airing hard-hitting exposes on the wealth accumulation of government officials and associated cronies: an intended solution to this problem had tipped the scales on a simmering row between the prime minister and his former financial guru, Lajos Simicska, leading to an unprecedented public falling-out that shocked the country: and the planned imposition of an internet tax had sparked widespread protests.

Although it should be stressed that at no point was the government in danger of falling, the extent of voter disarray was unparalleled in the history of the Fidesz party that Orban had helped found at the end of the 1980s.

Yet it was to get worse for the former anti-communist student activist and undisputed leader of Fidesz: a series of fraudulent brokerage collapses, most notably Quaestor, an operation with known ties to the Fidesz government, added to the public’s disillusionment: to cap the turmoil, in February and March the governing party lost two by-elections in provincial seats that it had won easily at the spring elections. These defeats, which resulted in the loss of the government’s two-thirds constitutional ‘super majority’, included one seat falling to Jobbik – the first individual constituency won by the far-right party.

Yet within months of this nadir, Orban was once again riding high in the polls, winning praise even from some lifelong, Socialist-voting diehards at home and gaining increasing international recognition, not least in the Central European Visegrad-4 bloc, which includes Poland and the Czech and Slovak Republics.

The cause of this remarkable turn-around was, of course, the migrant crisis. And the story of how Orban and his advisers managed (or, as critics would have it, stage-managed) the dramatic arrival of tens of thousands of asylum seekers seeking entry into Europe is central to “Hungarian Politics in 2015” – a study and analysis of the key events of last year and their likely future impact, which is authored by members of Policy Solutions, a left-leaning Budapest think-tank.

Indeed, from the Fidesz point of view, the whole exercise was so successful that, as the study concludes: “Fidesz probably wishes 2015 had been an election year as well, for by autumn at the latest it would probably have trounced the opposition by even larger margins than it attained in 2014. As Medián reported in its final poll of the year, no governing party in Hungary has been as popular at this point in its term as the Fidesz government now.

According to the latest poll by Tarki, published at the end of January, Fidesz has the support of 54% of decided voters.

As this volume details – a follow-up to the pioneering effort last year that examined Hungarian politics in 2014 – not only did the anti-immigration campaign revive and add to Orban’s profile amongst the faithful, it simultaneously cut the ground from under the feet of Jobbik (which had taken a consciously less strident line in 2014 in an attempt to reach more moderate voters), while reinforcing the public perception of the left as an agglomeration of parties in disorder.

Other areas of concern

Aside from the overriding theme of refugees and migrants, “Hungarian Politics in 2015” deals with issues ranging from foreign relations – including a telling section on the resolute stand of the US on corruption, and the resulting shock when the new ambassador reiterated these views in October – via government influence in the media to the sale of state farmland, against previous Fidesz proclaimed policy, which began in the autumn.

The authors also note that the economy, which according to most macro indicators has begun a steady, if late recovery, remains plagued by legal uncertainty and a lack of transparency. As an example, it describes the new law on public procurement thus: “Crucially, the initial law barred companies owned by relatives of cabinet members and other high officials from submitting bids in public procurement tenders. But in a very Fidesz-like solution, the government replaced this provision a little later with a relaxed requirement hidden in the final pages of a bill… [whereby] only relatives of high officials who actually live in the same household as the officials are barred from competing in public procurement tenders. While this safely excludes spouses... for the most part those who are of an age to run their own businesses can legally making a living from public money effectively controlled by their relatives.” As an interesting touch, the measure is retroactive.

What of the future? Is Orban likely to change or moderate his line? Far from it, according to this analysis: “it is in the interests of the government to maintain the ‘war atmosphere’ even once the problem has been resolved in Hungary. This is why the government is likely to look for other ‘enemies’ in the context of the migrant issue, primarily identifying Western liberals and the European Union as the culprits in this crisis.”

In other words, with Orban at the helm, Hungary, a small power in Central Europe, is likely to remain politically effervescent and punching well above its natural weight in terms of news value for the foreseeable future.

Co-published with the Friedrich Ebert Stiftung, a German foundation closely associated with the Social Democratic Party, the authors of this study are clearly not supporters of the Fidesz government or its leader. Yet they have been careful to put their personal preferences aside to present the prime minister’s political revival – along with the current divisions and weaknesses in the left-liberal camps – in the cool light of objective assessment.

The photographs, too, have, in the main, been thoughtfully chosen to reflect the political reality of the texts. “Hungarian Politics in 2015” is in English, but a more comprehensive, yet succinct overview would be difficult to imagine in any language.

The birth of a Kazakh banking empire: ATF Bank
1 hour ago
CEPR's action plan for Ukraine's wartime economy
12 hours ago
Missiles or sabotage: What caused the explosion at the Russian airbase in Crimea?
3 days ago
Population decline to take Emerging Europe back to the early 20th century
3 days ago
Czech government remains colour blind on green issues
4 days ago