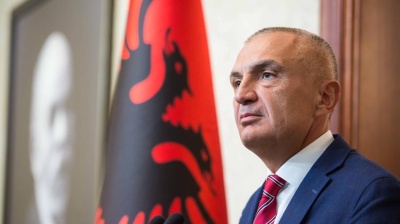 MPs from Albania’s ruling Socialist Party have launched an impeachment process against President Ilir Meta, the head of the Socialists’ parliamentary group Taulant Balla announced on May 3.

Efforts to impeach Meta were launched just weeks after the April 25 general election that resulted in the Socialists being returned to power for an unprecedented third term.

Meta, the former leader of the opposition Socialist Movement for Integration (LSI), was one of the most vocal critics of Prime Minister Edi Rama, leader of the Socialist Party, during what became a confrontational and sometimes violent election campaign period, characterised by harsh and personal attacks between Rama on the one side and Meta and Democratic Party leader Lulzim Basha on the other.

Now 50 MPs from the ruling party have asked the parliament to launch an investigating into the president. They say that during the campaign for the recent election, Meta “committed actions that run counter to the country’s constitution”, Balla said.

Commenting on the timeframe, Balla said the current parliament, which comes to an end of September 9, has time to set up an investigative commission and conclude the impeachment process.

While the Socialists have a majority in the current parliament — and will have one in the next as well after winning the recent election — it is not clear whether they will be able to bring together the two-thirds of MPs needed to request Meta’s impeachment. The final decision rests with the constitutional court.

Meta has claimed that the impeachment plan is intended to distract from abuses in the April general election. “Don't deal with ‘stun grenades’ but with the investigation of the electoral crimes!” the president wrote on Facebook.

International election observers criticised the use of state resources by the ruling Socialists in their election campaign, and Basha the leader of Albania’s main opposition party, the Democratic Party, said on May 3 that his party does not recognise the result of the election.

Meta had previously said he would resign if the Socialists achieved a majority of 71 seats or more in the Albanian parliament; preliminary figures indicate the party has taken 74 seats, while the LSI, whose support has dwindled, will have just four.

Meta is a former member of the Socialist Party, who left to set up the LSI in 2004. The LSI was a junior partner in Democratic Party governments before switching to support the Socialists when Rama first became prime minister in 2013. Socialist MPs then backed Meta to become president in 2017 (in Albania the president is elected by the parliament).

However, relations between Rama and Meta later deteriorated. The Socialists won a majority in the 2017 general election that allowed them to dispense with the LSI’s support and form a government alone, and ahead of the 2021 general election the LSI – now headed by Meta’s wife Monika Kyremadhi – struck an alliance with the Democrats.

Meta, meanwhile, indicated after the election that he would serve his full term as president, and talked of a return to the LSI after his term comes to an end in 2022.

Moscow back on lockdown as coronavirus infection rate surges again
7 hours ago
Lukashenko pushing illegal Iraqi refugees over the border into Lithuania
7 hours ago
Belarus is the “North Korea” of Europe, says US diplomat
3 days ago
European commissioner confirms €30bn EU investment plan for Western Balkans
3 days ago
Merger between Moneta Money Bank and Air Bank in trouble after proxy firms come out against
3 days ago