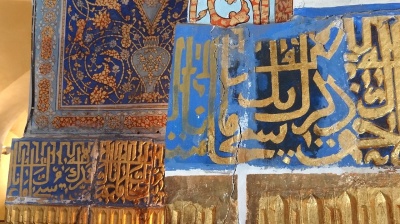 Detail of the interior of the gold-covered Tilla-Kari Madrasa in Samarkand, Uzbekistan. / Adam Jones from Kelowna, BC, Canada.
By Scott Osheroff in Singapore August 13, 2020

As many Asian central banks grasp the value of gold and continue to increase their holdings, western central banks have largely done the opposite and have sold large chunks of theirs in recent years. While gold is regarded by some economists and business people as an archaic relic, Uzbekistan is an important case study for why gold is so valuable for emerging economies.

The first half of 2020, like in many countries, was a challenge for Uzbekistan in relation to exports, which fell 7% y/y. Meanwhile, imports rose 3.6% due to the continued re-industrialization of the country and strong demand for animal protein. When excluding the country’s $2.12bn in gold sales, the current account deficit stood at $6.52bn. Accounting for the gold sold during the period, the current account deficit narrowed by 32.6% to $4.4bn.

Gold is an important commodity that the government uses to decrease the current account deficit, and as global trade slows, with increasing competition for a shrinking global economic pie, Uzbekistan has a guaranteed way to make sure its current account deficit, expected to move into surplus in the mid-2020s on the back of rising exports and a decrease in machinery imports, does not get out of hand; if it so wished it could sell enough gold today to move the country into a trade surplus. This puts Uzbekistan in a very unique and favourable position, providing strong support to the country’s finances for what will be a long road ahead on the way back to normality in the global economy.

At the end of this year’s first half, Uzbekistan’s foreign exchange reserves stood at $32.32bn, of which $19.60bn was gold, equivalent to 11mn ounces (the Central Bank of Uzbekistan continually replenishes its gold reserves through purchases of physical gold in local currency from state-owned mines). As of July 31, these 11 mln ounces of gold were valued at $21.73bn or 41.77% of GDP.

As part of its initiative to boost its status as a major global gold producer, the government is making an aggressive push to increase gold exploration and production. With 63 gold districts and proven & probable reserves at 8,500 tonnes, investing in Uzbekistan doubles as a synthetic play on gold.

Annual gold production is roughly 100 tonnes and the government has plans by the mid 2020s to increase combined gold and silver production to 270 tonnes. This will largely be contributed by increased production from the country’s largest mining companies—Navoi Mining and Metallurgical Combine (NMMC) and Almalyk Mining and Metallurgical Complex (Almalyk MMC), the former of which is being restructured for an expected international IPO in the coming few years.

Private investors are, however, also playing in the sector, mainly on the exploration side of things. Dual-listed B2Gold (TSE: BTO, NYSE: BTG) has already been awarded exploration licences where it is investing in early stage exploration and several other private outfits from Canada, the UK, Russia and other countries are all looking to get increasingly involved, especially once current mining legislation is further streamlined, making it easier to apply for exploration licences across the country.

With global gold production expected to fall during FY 2020 relative to historic 1-2% annual growth and amid an environment of rising demand, Uzbekistan is well positioned to benefit from the bullish gold backdrop amid the uncertain global economic outlook.