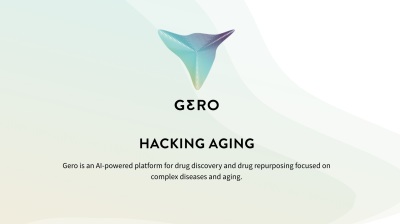 Gero has teamed up with the National University of Singapore to conduct experiments to extend life expectancy using AI
By EWDN in Moscow September 4, 2020

Gero believes this new drug “could enable patients to recover after a stroke” and “help cancer patients in their fight against accelerated ageing resulting from chemotherapy.” Gero’s platform is also used to develop drugs in other areas – including potential therapies for Covid-19.

Commenting on Gero, Dr. Nir Barzilai said that their research “provides answers to the most important practical questions and translates the received knowledge into medical technologies to combat ageing.” A professor of medicine and genetics, Dr. Nir Barzilai is director and leading aging researcher at the Einstein-Institute for Aging Research in New York City.

The company has just secured $2.2mn from an investor pool led by Belarusian fund Bulba Ventures. Gero previously raised more than $5mn, including through an undisclosed seed round in May last year, which also involved Bulba.

8 years of R&D Founded in Russia in 2012, Gero initially pursued a larger goal – developing a computational technology to facilitate the discovery of small drug molecules.

The company created a spinoff dedicated to metabolic reprogramming of neurons in excitotoxicity conditions. Another project – to be announced later this year – was developed with a leading US university, said Fedichev.

During these years, Gero also studied ways to use AI/ML approaches to tackle ageing.

This field became the exclusive focus of the startup in 2015. Gero gained access to large biobanks, aiming to develop next-gen modeling platforms for anti-aging targets and aging biomarkers identification.

“We discovered and tested multiple life-extending interventions based on the predictive capacities of our platform,” said Fedichev.

While the most promising therapeutic modalities in this field are “currently under development,” experiments with mice were prerequisites for future clinical trials. Such experiments were first conducted in France, then at the National University of Singapore at a much larger scale.

In 2019, the team published a research paper in Nature Research Journal about the application of machine learning techniques to big omics data as a means to discover anti-aging drugs. “This became one of the most popular papers in the field of cell and molecular biology,” notes Fedichev.

Asia’s anti-ageing appeal Why didn’t Gero pursue its development from Russia? Fedichev points several reasons for moving to Singapore three years ago: “First, this is a great place for doing business, and some of our investors were familiar with the jurisdiction. Second, we started a critically-important collaboration with the National University of Singapore.” Finally, says Fedichev, it appears that the Singaporean government is “ahead of the curve when it comes to ageing.” It is “very aggressive in tackling the related [health and wellness] challenges.” The Singaporean authorities fund cutting-edge projects in this field, and contemplate innovative clinical trial strategies. “Thus, Singapore is asserting itself at the forefront of ageing science and biotech developments,” believes Fedichev. Asia is going to be hit hard by a “silver tsunami,” he notes, with 250mn senior citizens by 2025 in China only.

In 2016, researchers from Oxford Economics and AARP estimated the volume of the annual US longevity market alone at $7.1 trillion. They forecast that by 2032 this figure will almost double to $13.5 trillion.