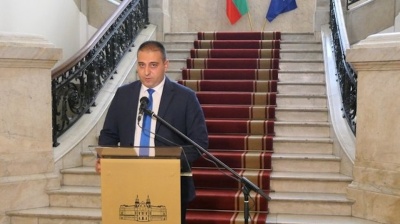 Hristo Daskalov, who revealed large-scale corruption at the checkpoint with Turkey several months ago, has been dismissed  as head of Bulgaria's food safety body, caretaker Deputy Agriculture Minister Krum Nedelkov has announced.

This is yet another removal of a key expert appointed by the former reformist government of Kiril Petkov since the change of government in June.

Daskalov, along with former deputy agriculture minister Ivan Hristanov, revealed corrupt practices related to testing of imported food at the checkpoint with Turkey.

Prime Minister Kiril Petkov announced in June that there had been no recordings of phytosanitary controls of food imported via Kapitan Andreevo — the busiest checkpoint in Europe — for 10 years. One MP from Petkov’s Change Continues party claimed that large amounts of heroin were trafficked through the checkpoint. The European Commission has since announced an audit of the checkpoint.

The revelations caused a political stir in Bulgaria. Hristanov said he was threatened, and was placed under police protection. Daskalov, meanwhile, said he was offered a substantial bribe in order to let the private company Evrolab 2011 continue taking care of phytosanitary controls at the checkpoint. However, in mid-August, the prosecution refused to charge Plamen Mollov, dean of the food technologies university in Plovdiv, with trying to bribe Daskalov, despite a wiretapped conversation between two men, who were identified by their voices as Daskalov and Mollov, leaked to local media in July.

Nedelkov said Daskalov was dismissed as he returned to work on the day after the October 2 general election in violation of the law. Daskalov was one of the Change Continues candidates in the election and, according to Nedelkov, he had no right to return to work before the central election committee announces the names of the new MPs.

Nedelkov also claimed that Daskalov dismissed and replaced several people on Monday, and signed an annex to a contract that had expired. Nedelkov accused Daskalov of going on a business trip to Italy without informing caretaker Agriculture Minister Yavor Gechev.

Daskalov said in an interview with Nova TV on October 6 that he was not allowed to appoint his replacement while being on leave for the pre-election campaign. He was told that a “more superior will” decided who will replace him, appointing Hristo Valchanov. Valchanov has now been officially appointed as head of the food safety body.

Daskalov suggested the selection had been made by caretaker Prime Minister Gulub Donev. In a post on Facebook, Daskalov also said that Valchanov initiated a renewal of the contract with Evrolab 2011.

He denied dismissing people on October 3, saying that the positions of two people were changed but that was a usual practice.

However, Days after being appointed by President Rumen Radev, Donev’s caretaker government replaced all Bulgaria’s municipal governors, the head of the revenue agency and other top public figures. It was seen as a cleansing of experts appointed by Petkov’s government and was not well accepted by voters. The rating of Donev's government quickly fell to around 30%.

Radev was seen as the godfather of the previous ruling coalition and of Change Continues. The party’s leaders, Petkov and Assen Vassilev, became popular thanks to their work in a previous caretaker government appointed by Radev after the April 2021 general election. Furthermore, Change Continues openly supported Radev’s candidacy for a second term.