"We are not scared, we are just very very angry" – Ukrainians respond to major missile attacks on Kyiv 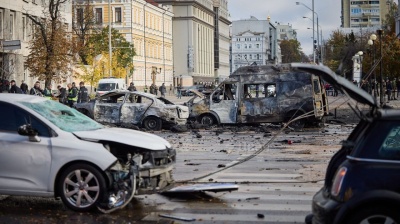 Russia’s missile strikes on Kyiv on October 10 have broken two months of relative peace in the capital and once again imprinted a bloody reminder of Moscow’s willingness to cause mass destruction.

Rockets rained down over a dozen cities across the country in the morning in what appears to be retaliation for the explosions that partially destroyed the Kerch bridge over the weekend. But the attacks against Kyiv caught the most attention, with some of the rockets striking close to the presidential administration build on Bankova in the heart of Kyiv. 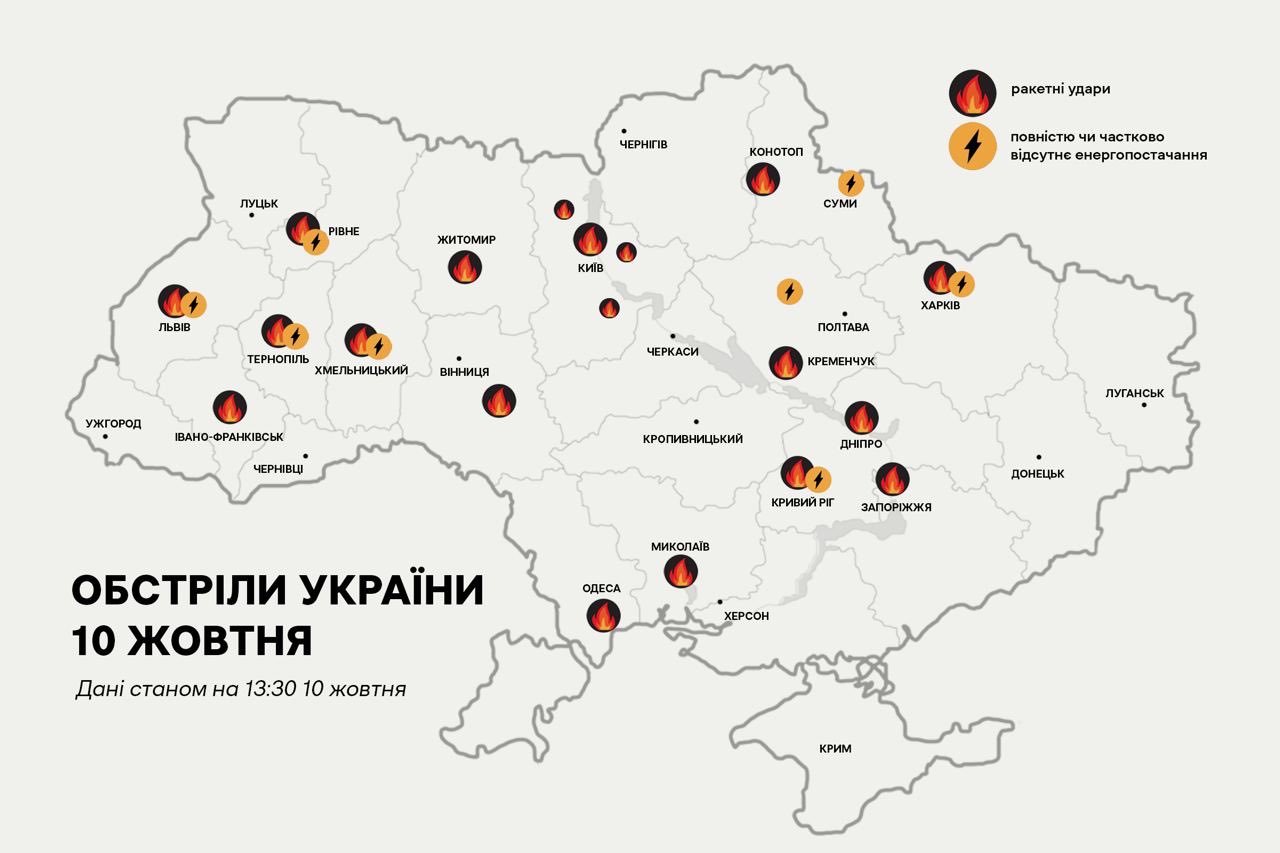 Map showing the location of missile strikes on Ukraine on the morning of October 10.

So far, 10 people have been reported killed in the missile and drone attacks, whilst 60 have been injured. The strikes hit civilian areas as well as key infrastructure like Kyiv’s thermal power plant (TPP). But Kyiv’s war-hardened citizens are not going anywhere.

“We are not scared; we are just very very angry. These are fucking terrorists. This is not normal,” Kris, a humanitarian worker, told her more than 21,000 Instagram followers. The Kremlin clearly intended to terrify the Ukrainian population, but all it has managed to do is inflame the sense of defiance that has translated into stunning successes on the battlefield in recent weeks.

In the morning, Kris heard a petrifying sound “like clouds tearing apart” and a child screaming outside. “It was like some mini-aeroplane was flying, but knowing the airports are closed, it was weird,” she tells bne IntelliNews in a telephone interview. Spotting smoke billowing across her neighbourhood, Kris grabbed her cat and immediately ran to the corridor to seek shelter, an action many Ukrainians are all too familiar with.

One hour later, she eventually went outside after the government instructed people to get water and supplies. Queues formed outside the shops as people cancelled their plans for the following days. Despite the sombre mood, Kyiv’s unity and community spirit constantly exceed the pressure of Russian President Vladimir Putin’s attacks.

“We had a little party during the air siren,” Kris jokes. “I was chatting in the queue with grannies and teenagers at the coffee shop. We were all talking about what an arsehole Putin is.” For now, Kris is watching the updates from Kyiv’s administrative centre, waiting to see if volunteers are needed. Although there have been no updates at the moment, volunteers will likely be needed this evening.

“I think police and ambulances are busy at the moment. Maybe later they will be cleaning up the destroyed buildings and bridges and will ask citizens for help. We’ll see.” Like many in Kyiv, Kris won’t leave her home town. She will continue to remain in the city and offer her help where it is needed. “Not even a nuke will kick me out of Kyiv,” she says.

This sentiment is shared by Nikita and his girlfriend Anna, who also refuse to leave Kyiv, despite the threat of more strikes in the future. “They can shell everything. Why leave for nothing when we can stay and do something,” Nikita told bne IntelliNews.

“Be Ukrainian, be brave,” Anna exclaims.

The couple were actually prepared for the attack, having received a message the evening before from a friend in the army warning of strikes across Ukraine in the morning. According to Nikita, the message said that the attacks will occur in three waves: first to overwhelm anti-aircraft defence; second to target energy infrastructure whilst the anti-aircraft defence reloads; third to target military objects.

However, the strikes hit many civilian targets, including near the Taras Shevchenko University and the popular Shevchenko park, both named after Ukraine’s national hero and poet who stood for Ukrainian independence during the Russian empire. One girl was recording a video call on her phone as she walked passed the university as a rocket came down close by, catching her in the blast. She was unhurt. In a third incident, a car was driving through the heart of the city when a rocket exploded just down the street, but the driver remained unflustered.

Nikita told bne IntelliNews that the air sirens have stopped and he hopes that the attacks are over. Nevertheless, the couple is prepared for another wave of missiles and have organised a plan to seek shelter in the subway if strikes resume in the evening.

“We are packing our bags,” Anna says.

“Just to make sure we are prepared if there is an emergency,” Nick follows up.

Vladimir Putin called the attacks a response to the explosion over the weekend that demolished a chunk of the Kerch bridge, which connects Crimea to Russia and is used by Moscow to transport military equipment to Southern Ukraine.

Although not confirmed to be caused by Kyiv, Putin called the destruction of the bridge a Ukrainian “terrorist act”.