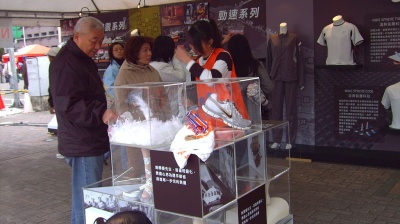 Uzbekistan's getting a piece of the action. / Rico Shen.
By bne IntelIiNews September 10, 2020

The agreements are in line with Uzbekistan’s overall goal to develop its textile industry, shifting focus away from plain and simple exports of raw materials used in the textile sector, such as cotton. Uzbek garment-textile exports rose by 112% to $1bn in the first half of 2020 as new markets opened up and new products were developed, Fibre2Fashion.com reported earlier this month.

Uzbekistan has a significant volume of quality leather alongside a relatively cheap workforce which will allow the country to produce clothes for more international brands in future, Boboyev said. He noted that Uzbekistan was seeking to become a clothing and footwear production hub in Central Asia.

"The agreement was reached with Nike and Adidas on entry into our market. Production of sports shoes will be established in the Andijan region,” Boboyev said.

“The plant of the Sino International joint venture plans to produce 3mn pairs of shoes of these brands," he added.

The Uzbek government is aiming to domestically process all of its cotton harvested in the country by 2025, Boboyev added. This would allow Uzbekistan to raise its textile products exports to $7bn per annum, officials believe. Tashkent has previously announced plans to spend $918mn on 77 projects in the textile industry by the end of 2019. Uzbekistan's annual cotton harvest currently stands at just below 3mn tonnes.

Uzbekistan has increased the proportion of value-added finished products such as knitwear and readymade garments to 51% of its textile exports, local media reported. The country has also begun exporting new products such as protective masks and clothing.

In 2018, the government announced a decision to create a free economic zone focused on producing sportswear and sports equipment in Tashkent Region. It hoped such a zone could attract a number of international brands, including Adidas, Reebok, Nike, Li Ning, Eleiko, Janssen-Fritsen and Gymnova, among others.

French company Atkorschultz in 2019 launched a $8.5mn footwear production plant in Uzbekistan’s Ferghana Region with the intention of producing high-quality men's, women's and children's shoes made of “genuine leather”. The plant’s capacity stands at 1mn pairs of footwear.

Last month, Cotton Campaign, which over many years has led the international boycott against Uzbek cotton and textiles in an effort to end all forced and child labour in the cotton fields, presented a new responsible sourcing agreement (RSA) framework. The agreement would facilitate responsible sourcing of cotton and cotton products by global brands and their suppliers and simultaneously provide monitoring of the cotton production process; capacity building for cotton and textile clusters, farmers, and workers; an enforceable grievance mechanism; and supply chain transparency. This could benefit both Uzbekistan’s cotton exports and textile sector exports for goods that rely on Uzbek cotton.

Uzbekistan says it has made huge progress in stamping out forced and child labour in the cotton fields in the past three years and is hopeful that all boycotts against its cotton and textiles products will be lifted in the not-too-distant future.