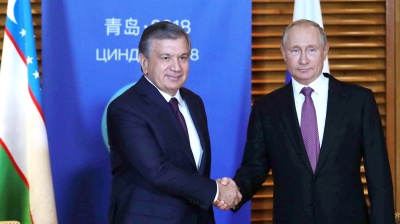 "The Uzbek president has made a decision and is currently working on Uzbekistan joining the EEU," Matviyenko said during a meeting with the head of the Uzbek lower chamber of parliament, Nuriddinjon Ismailov.

Uzbekistan has never previously expressed any explicit interest in joining the EEU.

"Local proponents of joining the EEU and the CSTO [Collective Security Treaty Organisation, an intergovernmental military alliance of Russia and other post-Soviet states] claim that Uzbekistan’s membership in these organizations would institutionalize the current favorable trade regime as well as close economic and military cooperation with Russia, thus stabilizing bilateral relations," Jamestown Foundation wrote in 2017.

"Moreover, it would help the 2 million–3 million Uzbekistani migrant workers in Russia who continue to face hardships there, despite various recently signed bilateral agreements meant to ease their access to the Russian labor market,” the foundation added.

It also noted: “The Uzbekistani guest workers’ difficult situation would probably be further eased thanks to their native country’s EEU membership. Incoming migrant laborers from EEU member states are exempted from Russian-language and Russian-history exams, enjoy access to free medical services, have their university degrees recognized and, most importantly, are not required to purchase costly work permits."

Under Mirziyoyev’s predecessor Islam Karimov, who died while still in office in late 2016, international agreements such as the EEU were seen as political alliances undermining Uzbekistan’s political neutrality and, potentially, its sovereignty.

Many individuals and groups in Central Asian nations view the EEU primarily as Russia’s political tool rather than simply as an economic alliance because the trade bloc does not necessarily offer economic benefits to the member countries. For example, Kyrgyzstan’s car re-export market and the Dordoi bazaar were both seemingly strangled by the new regulations that came with EEU membership, with the former fading out of existence. Prior to joining the EEU, Kyrgyzstan exported used cars from abroad and sold them to neighbouring nations—mainly Kazakhstan.

In Uzbekistan’s case, joining the EEU may complicate some of its focus on attracting Western investors as it would become increasingly enmeshed in post-Soviet links to Russia.

The EEU commenced in 2015 on the basis of a customs union created in 2010. The original members are Russia, Belarus and Kazakhstan. Armenia became a member of the free-trade bloc in January 2015, while Kyrgyzstan joined in August 2015. The trade bloc is set to launch a temporary preferential trade agreement with Iran in late October.

The Mariupol siege is over as the last Azov defenders surrender
1 minute ago
Kyrgyzstan: Eccentric health minister fights for his job amid claims of corruption and bullying
14 hours ago
Azov commanders have remained behind in the Mariupol steelworks to continue the fight
15 hours ago
Russia hopes Chinese carmakers will help revive Moskvitch brand
15 hours ago
Russia may leave the WTO and WHO. In practice, it never really joined
15 hours ago