UPDATED: Kyiv, Dnipro and half a dozen other cities hit by rocket attacks 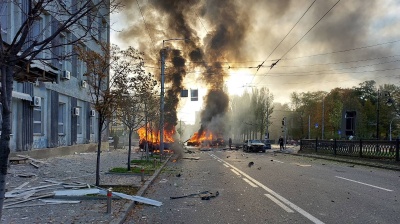 As the sun came up on Monday morning Kyiv and half a dozen other Ukrainian cities were hit by rocket attacks, killing dozens of people. / bne IntelliNews
By bne IntelliNews October 10, 2022

Dozens of missiles struck the centres of Kyiv and half a dozen regional cities without warning on the morning of October 10, sending residents scurrying for cover in bomb shelters and the metro.

The strikes are likely to be retribution for the explosion that destroyed part of the Kerch bridge over the weekend. So far, eight have been confirmed dead and 24 injured.

Russian President Vladimir Putin and Deputy Head of the Security Council Dmitry Medvedev declared that they will punish the “terrorists” they say are responsible for the Kerch bridge bombing on October 8. Russia is accusing the Ukrainian intelligence service of orchestrating the attack.

“We’ve been hit in Kyiv. Attack on the city centre. It’s bad,” tweeted Sarah Ashton-Cirillo, a journalist in the Ukrainian capital, after being roused by the sound of explosions.

Russian media reported that one rocket had landed near the presidential administration building on Bankova in the heart of Kyiv. Another came down in Shevchenko park, a popular public space usually full of people walking their dogs or taking a stroll. In another video posted on social media a girl was recording a message when a rocket fell nearby, catching her in the blast, although she escaped unhurt.

The attack follows multiple rocket attacks on Zaporizhzhia that killed dozens of people over the weekend. More missiles struck the town that is home to one of Ukraine’s nuclear reactors and targeted a residential building, which collapsed. A whole section of the house was destroyed. “There may be people under the rubble, rescuers are working at the scene of the tragedy,” the Kyiv Independent reported shortly after the attack.

“Another horrendous attack on Zaporizhzhia city by Russia last night. A dozen rockets. No information as yet on the number of victims,” journalists Oliver Carroll tweeted.

In addition to Kyiv there are reports of strikes against the regional cities of Khmelnytskiy, Obukhiv, Zhytomyr, Lviv, Ternopil and in the Kyiv region. The mayor of Dnipro also reported explosions, confirmed by footage posted on social media.

“Russia is firing rockets at central Kyiv in response to the partial destruction of the Kerch bridge, perceived by Putin as a mockery of him. Pro-Kremlin propaganda called for retaliation/revenge. Every spot in Ukraine can be attacked by Russian air missiles,” academic and bne IntelliNews contributor Denis Cenusa said in a tweet.

There is no confirmed casualty count but individual reports say dozens have been killed or injured. Kyiv has not been subject to missile attacks for months, since the Kremlin refocused its efforts on Phase 2 of its war, concentrating on trying to take the Donbas and secure its hold on occupied lands in the south of the country.

bneGREEN: War in Ukraine speeds up global transition to renewable energy
CESEE banks expect credit conditions to tighten and NPLs to rise
Is Russia putting additional pressure on Belarus to join the war?