UPDATE: Massive explosions at oil depot in Western Russia, but who is to blame? 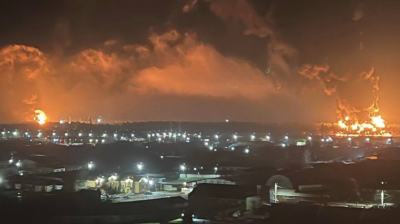 Massive explosions at an oil depot in Western Russia went viral online and were verified by open-source-intelligence accounts on 25 April.

The blazing fire in the city of Bryansk, only 150 km from Ukraine’s border, has resulted in conflicting accusations as the culprits remain a mystery, with both Ukraine and Russia in the crosshairs.

The site of the fire was confirmed to be the Transneft-Druzhba depot, a subsidiary of the state-run oil export company Transneft, Russia's leading oil transportation company that runs the major Druzhba pipeline from Russia to Europe. No injuries have been reported, the Emergencies Ministry told Russian state media Tass, and it appears the pipeline itself is not damaged.

On morning of April 26 Russian authorities reported that an explosive device was reportedly discovered attached to a railway. No exact location reported at the time of writing other than the device was found near Bryansk in southwest Russia.  The device is reportedly a Soviet SZ-6 demolition charge. The discovery of the charge strongly suggests that Russian infrastructure is being targeted by saboteurs, presumably Ukrainians striking at assets within the Russian Federation.

Separately, another oil facility in Russia’s Far East on the Chinese border was subject to an explosion and fire on April 25. The authorities have yet to comment on the causes of the explosion and clearly the location is far to far from Ukraine for the cause to have been a missile or drone strike.

A fire at a secondary unit at an oil refinery owned by Rosneft in Russia’s far eastern city of Komsomolsk-on-Amur has been contained, a spokesman for the refinery said on April 26, reports Reuters. The blaze has not caused any injuries and the incident would not have in impact on production plans, he said. 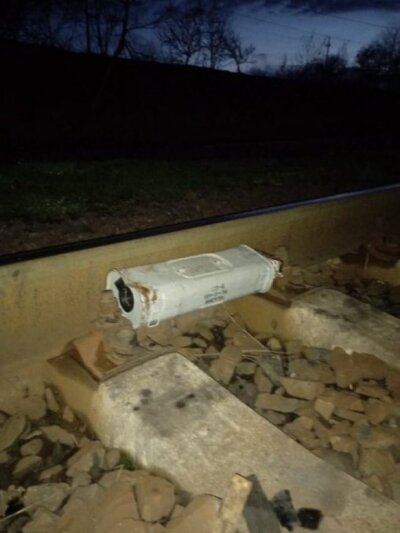 The head of the Investigative Committee of the Russian Federation Aleksandr Bastrykin has ordered an investigation into the cause of the fire. Although nothing has been confirmed, Twitter users are speculating that Ukrainian forces attacked the depot. Ukrainian officials have so far not responded and this claim has not yet been substantiated.

Twitter users suggest that a Ukrainian drone strike is the likely cause of the explosions, as there were no reports of military helicopters or planes in the area. They point to two Ukrainian drones which were shot down by Russian forces in the Kursk region hours after the depot explosion as evidence for this claim.

In footage from Bryansk, journalist Oliver Carroll noted that a missile could be heard moments before the explosion.

“Moment of explosion (and what sounds like a missile flying) at Bryansk oil depot, apparently targeted by Ukraine this am. Spokesman for Russia’s defence ministry has promised revenge strikes in central Kyiv ‘which Russia has refrained has refrained from doing so far’”, he wrote on Twitter.

Russia previously accused Ukraine of attacking a fuel depot in Belgorod earlier this month. The Kremlin claims that two Ukrainian helicopters flew at low altitude to avoid radar detection and successfully managed to destroy a fuel depot in the city, although Kyiv denied it was involved.

Moreover, Russia alleges that Ukrainian helicopters also targeted residential buildings in Bryansk on April 14, and threatened to retaliate with force.

"If such incidents continue, then consequences from the armed forces of the Russian Federation will be attacks on decision-making centres, including in Kyiv, which the Russian army has refrained from to date," Russia’s defence ministry said, according to Reuters.

However, Ukraine denied conducting any military attacks on Bryansk. Instead, the Ukrainian Centre for Countering Disinformation claimed Moscow orchestrated "a plan to carry out terrorist acts to whip up anti-Ukrainian hysteria" in Russia.

This has caused some to theorise that the Bryansk explosion is a false flag operation to justify further Russian aggression. A Telegram message from the NGO InformNapalm published on April 21 adds weight to this claim and casts doubt on the drones allegedly shot down in the Kursk region.

"Russian troops were tasked to urgently collect and deliver to the territory of Belgorod, Kursk and Bryansk regions the wreckage of downed Ukrainian 'Bayraktars' and helicopters. The FSB and the Russian Defence Ministry are preparing large-scale provocations in these areas, with explosions at civilian infrastructure and in residential areas," InformNapalm stated in the message.

Moreover, a Facebook post from Ukrainian journalist Roman Tsymbaliuk alleges that Russian military leaders left the city with their families days before the incident.

“Command of the 144 Motor Archery Division (v/h 23060, Smolensk) secretly transports their families from the Bryansk region into the depth of the Russian Federation,” Tsymbaliuk wrote on April 19.

On the same day, Olga Lautman, an analyst for the Centre for European Policy Analysis, posted Tsymbaliuk's Facebook status on Twitter with the caption: “Posting this in case Russia attacks Bryansk and tries to blame Ukraine. Again”.

Bryansk’s close position to the border of northern Ukraine has meant it is a key transit point for Russian military heading to Ukraine. If an attack was conducted by Ukraine, it would likely be to exacerbate Russia’s fuel crisis, which has been a major issue for Russian troops in Ukraine.

Despite the massive fire and damage inflicted to the Bryansk depot, Russia’s Energy Ministry claims it will not cause fuel shortages and that the region has enough diesel fuel for 15 days, according to the Washington Post.

Although the Druzhba pipeline was not affected, there are concerns that gas and oil pipelines will be destroyed in the conflict. Taking out the pipelines will plunge Europe into an even bigger crisis that would almost certainly mean freezing homes and rolling blackouts throughout the whole of next winter, as Russia is the European Union’s largest oil supplier, providing the bloc with a quarter of its oil and petroleum product imports in 2020.

To apply even more pressure to Moscow, Ukraine has insisted that Europe impose sanctions on Russian oil, which eventually came to fruition in the sixth round of sanctions earlier this month. A ban on oil exports could have a devastating impact on Russia’s budget revenues.