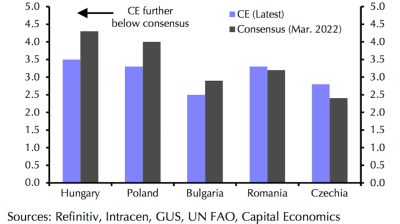 Capital Economics' forecasts for CEE GDP this year against the consensus forecast.
By bne IntelliNews March 30, 2022

Capital Economics forecasts that Russia’s invasion of Ukraine could knock 1 to 1.5 points of growth in Central and Eastern Europe this year.

The British economic forecaster says there are already clear signs of spillovers in CEE from the war. Oxford Economics warned earlier this month that CEE was one of the most vulnerable regions to the economic impact of the conflict.

The hit will come through two main channels, says Capital Economics. Industry will be hit by weaker export demand, supply chain disruptions and higher energy prices. This could knock 1.0-1.3% points off GDP growth in Hungary, Czechia and Poland this year.

It points out that total goods and services exports to Russia and Ukraine amounted to 3% of GDP in Central Europe before the war.

Supply chain disruptions will occur, as in some industries Russian inputs are significant. Some 10% of intermediate inputs used by manufacturers in Poland are from Russia, and the share is 25% in Bulgaria and Lithuania. Iron ore imports from Ukraine account for 80% of total iron ore imports in Czechia and Poland. Steel producers in Poland have said they expect disruptions to last for two-three months until new supplies are found.

The automotive sector faces further disruptions. The Czech automotive association has said that a third of firms have reported raw materials shortages due to the conflict. Meanwhile, surveys of Polish manufacturers show that a record-high share of firms in the motor vehicles and fabricated metals sectors reported shortages as limiting production in March.

The second main channel is that higher oil and food prices will have a big impact on inflation. With the price of oil at $120 per barrel and likely to remain above $100 this year, headline inflation will stay well above central banks’ targets. Capital Economics anticipates the war adding two percentage points to CEE inflation this year.

Some food imports from Russia and Ukraine are significant, including nuts and seeds and vegetable oils. Poland imports more than 50% of sunflower and soyabean oil from Ukraine, so is particularly vulnerable to trade disruptions. Processed food inflation in Poland is set to reach 15% year on year this year.

The dampening effect of higher inflation on households’ real incomes and consumer spending will be reinforced by tighter monetary conditions. Central banks have stepped up tightening cycles this month, with the Czech central bank expected to raise rates on Thursday.

Capital Economics forecasts interest rates to rise towards 6% in Poland and 8% in Hungary this year. Consumer confidence has already plunged in Poland and Czechia in March – in the former, to its lowest level since at least 2000.

Oil prices will also put current accounts and exchange rates under pressure. If oil falls to $100 per barrel by year-end, the energy import bill in CEE will be $20bn higher this year than in 2021, equivalent to 1.0-1.5% of GDP. Oil bills will push current accounts into a larger deficit in Poland and Hungary (5% of GDP), and to even more alarming levels in Romania (8% of GDP), said Capital Economics. This will keep exchange rates under pressure.

Capital says that these two channels will knock 2.5% points off CEE GDP growth this year, but looser fiscal policy and a potential boost from Ukrainian refugees will provide some offsetting support, so it estimates that overall GDP growth will be lower by 1.0-1.5% points.

Hungary and Poland are continuing their loose fiscal stance. But even the new Czech government, which had planned big budget cuts this year, now appears to be backtracking. The Czech central bank governor has warned that the economy could flatline this year.