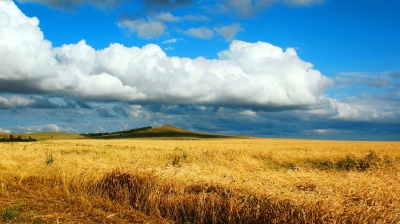 Ukraine has exported 49.7mn tonnes of grain and is set to take the title of world's biggest exporter from Russia. / wiki
By bne IntelliNews July 2, 2019

Russia has been the global grain exporter top dog for the last three years, but as the agricultural marketing year ended on June 30, it looks like Ukraine has snatched the title back from its rival.

Thanks to a bumper 70mn tonnes of grain harvest, Ukraine was able to push exports up to just shy of its official target and sold 49.7mn tonnes to other countries. The Ministry of Agrarian Policy and Food had predicted that exports would reach 50mn tonnes this year.

That should pip Russia to the post, though Russia is also on track for a good harvest this year that is forecast to reach 118mn tonnes. While Russia’s final export numbers for this agricultural marketing year have not been released the official forecast for exports was only 46mn-48mn tonnes this year and the harvest will be down slightly on last year's.

Rivalry aside, grain has become a major hard currency earner for both countries and this year’s exports are worth circa $20bn for each country. The excess grain also provides the basis for development of animal husbandry businesses, which are developing rapidly in both countries.

Russia continues to favour the sector to spur further development. Last week the government announced that it is extending the term of the zero rate on wheat exports until July 1, 2021. According to a decree posted on the official government website: “The decision will facilitate the export of produce of the agro-industrial sector.” The zero wheat export duty, introduced in Russia three years ago, was valid until July 1, 2018 with a subsequent extension until July 1, 2019.

During his recent Direct Line Q&A session, President Vladimir Putin said that Russia’s agricultural exports are expected to double, reaching $45bn in the next five years. Moreover Putin has ordered Russia develop a brand of “green” non-GMO grain to market on the international stage.

In 2016, Russia became the world leader in wheat exports. The country’s share of the global wheat market has quadrupled since the early 2000s. Overall, Russian agricultural production surged by 20% over the past five years.