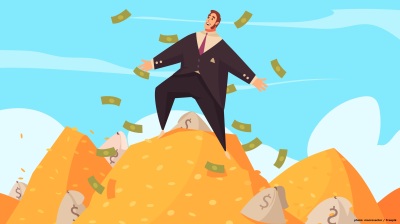 Ukraine’s Security Council has drawn up a list of 13 oligarchs as it prepares legislation to curb their avarice and political influence. / wiki
By Ben Aris in Berlin May 12, 2021

Ukraine’s Security Council has drawn up a list of 13 oligarchs in an effort to restrict their influence on politics and curb their ability to earn economic rents from the state, the National Security and Defence Council (NSDC) Secretary Oleksiy Danilov said on May 11.

The full list of names has not been released yet, but several names are expected to appear on the list as they fit the criteria defining an oligarch laid out by the NSDC.

Top of the list is likely to be oligarch Ihor Kolomoisky, who financed Ukrainian President Volodymyr Zelenskiy's successful election bid in 2019, but has been working to undermine both Ukraine’s $5bn stand-by agreement (SBA) with the International Monetary Fund (IMF) and the independence of the central bank as part of his campaign to have his PrivatBank returned, which was nationalised in 2016 after a $5.5bn hole was discovered in its balance sheet.

Kolomoisky and his partners have been accused of stealing that money, triggering the largest bank bailouts in Ukraine’s post-Soviet history. Yet despite multiple court cases in places such as London and Cyprus, none of the money has been returned and Kolomoisky continues to operate in Ukraine unimpeded and has not been arrested or investigated at home.

After Zelenskiy’s election, Kolomoisky made advances, gaining control of Centrenergo, a highly attractive state-owned energy company, and preserved his control over Ukrnafta, a state-owned petroleum producer where he owns a minority stake.

As bne IntelliNews reported, “The Oligarch Problem” is one of the main challenges Ukraine faces today, as after three decades the most power businessmen are deeply entrenched in Ukraine’s political and economic life. Oligarchs control more than half the seats in the Rada and routinely attempt to stymie reform legislation that hurts their business interests or block privatisations of attractive companies that they are trying to take over themselves by more nefarious means.

While Zelenskiy has sat on the fence for most of his first term, something changed earlier this year when he launched a concerted campaign to curb the oligarchs' excesses. In a move reminiscent of Russian President Vladimir Putin’s infamous oligarch meeting a year after he took office, where the Russian president struck a devil's bargain, telling the captains of industry “you can keep what you have, but stop the stealing,” Zelenskiy did more or the less the same with his oligarch speech in March.

Zelenskiy followed the speech up with outspoken public comments in April calling oligarchs “bandits that robbed the state.” In one TV address, he listed several top oligarchs by name, ironically echoing Putin by saying they will have to “live by the law.”

That has been followed by sanctions on Viktor Medvedchuk, the head of the Political Council of the Opposition Platform, For Life Party and a personal friend of Putin. Three TV stations associated with the oligarch have been closed and this week the General Prosecutor charged him with high treason, and he has reportedly gone into hiding.

Zelenskiy is partly motivated by encouragement from the new Biden administration that has also started to act against Ukraine’s vested interests. In an unprecedented move the US imposed sanctions on Kolomoisky in March, who has been accused of laundering hundreds of millions of stolen PrivatBank money through commercial structures in Cleveland.

During his trip to Kyiv last week US Secretary of State Antony Blinken pointedly met with anti-corruption activists and mentioned that a “de-oligarchization” of Ukraine is needed. The IMF has also highlighted the problem in connection with the need to ensure the independence of the National Bank of Ukraine (NBU).

Zelenskiy asked the Security Council to draw up the list in April that is part of a bill that will be submitted to the Rada but is not ready yet.

The Kyiv Post published some of the names on the list, according to a source with the knowledge of the matter who wasn’t authorised to speak to the press.

The Security Council’s bill defines oligarchs as “businesspeople who control monopolies, own media and participate in politics, either personally or through close allies,” the Kyiv Post reported and drew up a list of the names that are most likely to appear:

Ihor Kolomoisky and his business partner Gennadiy Bogolyubov, who have extensive interests in media, finance and energy;

Dmytro Firtash, who has interests in nitrogen fertilisers, titanium and energy, including control of 80% of the electricity distribution companies connected to housing, but is currently in Vienna fighting a US extradition order;

Serhiy Lovochkin, who is a politician and ally of Medvedchuk;

Victor Pinchuk, who owns the Interpipe metallurgical company amongst other entities;

Kostyantyn Zhevago, who owns the metallurgical company Ferrexpo but is a fugitive after he was accused of looting his banks of $178mn;

Viktor Medvedchuk, who had an oil pipeline that was just nationalised as part of the new sanctions imposed on him, but also has extensive business interests in Crimea and Russia;

Vadym Novinsky, who is a wealthy Rada deputy.

All of them control business assets worth billions of dollars, have the political reach, and together control at least 65% of Ukraine’s TV market, reports the Kyiv Post.

Four of them are lawmakers. Poroshenko leads the 27-member European Solidarity faction in Parliament. Medvedchuk and Lovochkin co-chair the pro-Russian 44-member Opposition Platform. Novinsky is an independent lawmaker.

Ex-lawmaker and Kyiv Post columnist Sergii Leshchenko, who has been a prominent anti-corruption activist, published his own list of those that could be included. He added the names of poultry tycoon Yuriy Kosiuk, fugitive agricultural mogul Oleh Bakhmatyuk, and the family of Oleksandr and Halyna Hereha, who control Ukraine’s largest home improvement store chain, Epicentr.

While those four are not as widely known as the media owners, at least three of them have media assets. Bakhmatyuk owns local media in Ivano-Frankivsk, while the Herehas reportedly control a local TV station in Khmelnytskiy, also a Western Ukrainian city, the Kyiv Post reports. Firtash and Lovochkin co-own Inter, a TV channel popular with pro-Russian audiences in Ukraine. Pinchuk owns the popular TV channels ICTV, STB and Novy.

In another sign that the tide is turning and that Zelenskiy has turned on his former mentor, in early 2021 the government replaced the management of Centrenergo, allegedly to eliminate Kolomoisky’s influence. On April 22, the oligarch’s offices in central Kyiv were searched over suspected embezzlement of $8mn from Centrenergo. Before that, in January, one of Kolomoisky’s top allies in Parliament, lawmaker Oleksandr Dubinsky, was kicked out of Zelenskiy’s party faction, the Kyiv Post reports.

Rinat Akhmetov is Ukraine’s richest oligarch and has so far kept his head down and continues to flourish under Zelenskiy. Amongst the assets Akhmetov controls via his SCM holding is the DTEK energy company and Metinvest steel and mining holding. Both have benefited from sweetheart deals with the state-owned railway monopoly Ukrzaliznytsia, which transports iron ore and coal at below-market prices that is a drain on the state.

But Akhmetov’s businesses are also in the cross-hairs and the Rada recently drafted a bill that would impose a cheap iron ore resource tax that will hurt Akhmetov’s businesses, although as Akhmetov controls the largest fraction in the Rada, getting the law passed won’t be easy. The new taxes will also hike costs on Ferrexpo.