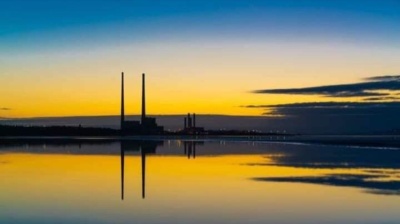 Ukraine cut itself off from the Russian power grid for a 72-hour test the day before the Russian invasion and then found itself in a mad scramble to hook up to the European grid almost two years ahead of schedule. / wiki
By Ben Aris in Berlin March 29, 2022

On the day before the war with Russia started, Ukraine managed to unhook itself from the Russian electricity grid and hook itself up to the European grid. Within two weeks the two systems were synchronised in a feat that has been called “jump from one moving train to another.”

Ukraine initiated the process of joining Europe’s grid in 2005 and began the process of disconnecting itself from the Soviet-era power grid in 2017, but perennially short of power, especially since it lost control of several power stations in the disputed Donbas region, it has been working towards the goal slowly.

Kyiv banned the import of Russian power last year, but set a deadline for the ban of October 1, when the annual heating season starts. Kyiv also said publically that it would not buy power from the new Belarusian nuclear power station (NPP) at Ostrovets (aka Astravets), built and funded by the Russians and part of the Soviet-era grid. However, in the cold winter of 2020-2021 both Ukraine and Lithuania were forced to import more power from the Ostrovets NPP in just January 2021 than they had imported from Belarus in all of 2020.

That experience gave some real impetus to Kyiv’s efforts to modernise its power system and break its dependence on the Soviet-era power infrastructure. In parallel, the country has been investing heavily into renewable energy, which has attracted some $5bn of foreign direct investment (FDI) thanks to overly generous green power tariffs that in turn caused a non-payment crisis that was resolved last summer and the $1bn of debt paid off after Ukrenergo issued a bond in November 2021.

The power sector reforms have been slow moving and patchy but Ukraine’s electric grid operator finally successfully disconnected the country’s power system from the larger Russian-operated network on February 24 and hooked into the European Network of Transmission System Operators for Electricity (ENTSO-E).

Initially the decoupling was supposed to be a 72-hour trial to prove that Ukraine could operate on its own and a preparation for eventually linking with the European grid in 2023. But only four hours after the test started Russian tanks rolled over the border and the war started.

Ukraine’s power operator Ukrenergo scrambled into action. The war meant it was now impossible to re-join the Russian system. Russian troops quickly captured the Chernobyl power station and then rolled up from the south to take the still functioning Zaporizhzhia NPP, one of four active NPPs in Ukraine. A fierce battle was fought for the ZNPP in what Ukrainian President Volodymyr Zelenskiy called, “a night that could have stopped the history of Ukraine.” The only plus side is Ukraine’s existing generation capacity could easily cope, as the invasion caused power consumption to drop by a third.

Three days later it sent a letter to ENTSO-E, which represents 35 countries, requesting authorisation to connect to the European grid early. Moldova made the same request the following day, as it is also in the Russian crosshairs.

It was a big ask. Europe has rallied to support Ukraine’s heroic battle against Russia, but linking power systems is more than just throwing a switch. Get it wrong and you can turn out the lights in entire cities and seriously damage equipment connected to the mains or even the equipment in the power stations themselves. European operators agreed but needed to proceed carefully.

“Utilities and system operators are notoriously risk-averse because the job is to keep the lights on, to keep everyone safe,” says Laura Mehigan, an energy researcher at University College Cork told Scientific American in a feature on the change-over.

The main issue became synching the two systems, a process that normally is managed step-by-step very carefully over time. Ukraine’s engineers managed to complete it in just two weeks, by March 16, in the midst of a war that saw the Russian forces deliberately target power facilities as one of its strategic targets. It was “a year’s work in two weeks,” according to a statement by Kadri Simson, the European Union Commissioner for Energy. No power system has been ever synchronised as quickly before, say experts.

Ukrenergo, Moldelectrica and ENTSO-E managed to align the frequencies of every energy-generation facility in the connecting systems. The task was to join the new generators to a system spanning Europe where energy-generating turbines spin 50 times per second in near-perfect unison. For Ukraine and Moldova to join in, their systems had to be adjusted to exactly match that rhythm of the other generators.

“We can’t stop the power system for an hour and then try to synchronise,” Paul Deane, an energy policy researcher at the University College Cork in Ireland told Scientific American. “This has to be done while the system is operating. It is like jumping onto a moving train or a spinning ride at the playground: the train or ride is not stopping, so you had better time the jump perfectly.”

The technical part has been pushed through but there is still a lot of work to do before Ukraine can be fully integrated into the European system. The original plan was to address all of ENTSO-E's remaining concerns on market, regulatory, cybersecurity and legal issues. Dealing with all these issues was supposed to be more than another year, but how they will be addressed is post factum. The upshot is the synchronisation enables Ukraine to purchase power from the rest of Europe, but the country cannot yet sell it.

Full integration with the European grid will likely take until at least the war is over and Ukraine can rebuild. To sell power Ukraine’s power stations need to install new equipment but that can’t be done while the whole country is an active war zone. And Ukraine’s power consumption is currently still dropping as city after city is being destroyed by the advancing Russian forces. But Urkenergo for one is standing by and is ready to build a new and improved power sector once peace returns to Ukraine.