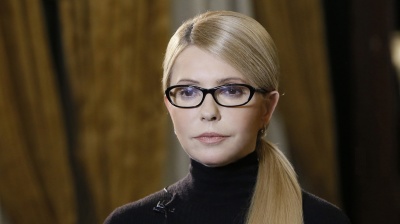 Ukraine's opposition leader, former prime minister and leader of the Batkivshchyna (Fatherland) party Yulia Tymoshenko is going to create a war cabinet, whose composition will be made public closer to the presidential elections in March 2019.

"Our team has started creating real strategic documents and bills that will ensure their implementation in keeping with the planned schedule," Interfax news agency quoted Tymoshenko as saying on October 30. "To perform this job and develop a detailed strategy of peace, I herewith declare the start of the formation of a war cabinet whose composition will be made public by the E-Day of the presidential elections."

Tymoshenko spoke for almost two hours at conference and laid down more detail of her overtly populist platform ahead of the elections next year.

Batkivschyna's member Andriy Senchenko will coordinate the formation of that cabinet. At the same time, Tymoshenko slammed the fact that the military doctrine of Ukraine was only approved by the president of Ukraine 18 months after the combat actions in Donbas started.

Tymoshenko, who was the first politician in the war-torn country to officially announce a bid for the 2019 presidential elections, has highest approval rating amongst the politicians who potentially are able to take part in the race, although the poll results remain unreliable.

The opposition leader also said that it is necessary to strengthen sanctions against Russia, which should lead to the complete liberation of annexed Crimea and the Moscow-controlled territories of Donbas in the east of the country. "The Ukrainian people are not ready to wait for the fall of the Berlin Wall for decades, so our fourth step to peace is a real increase in sanctions that are applied to Russian enterprises, as well as to the Russian top leaders."

Over the past two and a half years, the Normandy format representatives (Germany, France, Ukraine and Russia) failed to secure any significant progress during talks on settling the conflict, which erupted in 2014 as pro-Russian separatists in East Ukraine broke away from Kyiv's central control. Around 11,000 servicemen, rebels and civilians have so far died.

Tymoshenko also suggested that Ukraine needs a new constitution that will provide for maximum freedom of citizens but keep Ukraine as a unitary state, with no special status for the Donetsk and Luhansk regions. "No special status neither for Donetsk nor for Luhansk regions can be a point for discussion," she believes.

According to the politician, Ukraine needs a different strategy. "We need a new constitution of Ukraine that will provide for all the rights and freedoms of all of the communities in Ukraine but will keep Ukraine as a unitary state, with no federalism to be allowed ever," she added. "There can be no general amnesty to separatists] without a scrutinised review."

The remark about federalism was aimed at Russia, which has been lobbying for Ukraine to transformed into a federation. While the government has very successfully pursued a decentralisation policy that devolves more power to local authorities, the government has avoided federalism as it is afraid Russia would infiltrate and split of federalised regions – especially in the east of the country.

At the same time, Batkivshchyna leader intends to initiate the creation of a fund for the restoration of Donbas that has been badly hit by Moscow-Kyiv war. "I will propose a special presidential initiative on security and development of Donbas to create jobs and modernise the economy, restore housing and critical civil infrastructure," Tymoshenko underlined, adding that an international fund for the restoration and development of Donbas would be created.

The statements followed Tymoshenko's promise to change the format of negotiations with the Kremlin to attempt to bring Russian military aggression against Kyiv to an end.