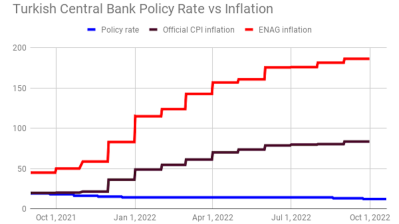 Official consumer price index (CPI) inflation in Turkey amounted to 83% y/y in September, following on from the 80% announced for August, the Turkish Statistical Institute (TUIK, or TurkStat) said on October 3 (chart).

The September figure is the highest headline inflation rate recorded by Turkey since the 85% posted in July 1998.

At 83%, Turkey stays in sixth place in the world inflation league. Turkey has led the global inflationary period. Now, it is to lead the stagflation/slumpflation period. Critics of the Erdogan administration claim the official growth figures in no way properly reflect the ongoing tragedy besetting the country’s real economy.

TUIK, meanwhile, gave an official figure of 152% y/y for producer price index (PPI) inflation in September, up from 144% in August.

The September figure was the highest posted since the 157% y/y reported for January 1995.

On September 28, Turkey’s president, Recep Tayyip Erdogan, said during a televised interview that he is intent on Turkey’s policy rate standing in the single digits by end-2022.

On September 22, Turkey’s monetary policy committee (MPC) cut the benchmark rate by another 100bp to 12% (chart).

The MPC has three more meetings scheduled for the remainder of 2022. They are to take place on October 20, November 24 and December 22.

According to Erdogan’s guidance, the committee can be expected to deliver 100bp cuts at each meeting.

Turkey’s policy rate remains idle on the sidelines while the government controls the monetary conditions via macroprudential measures and non-capital controls.

There is enough lira and there are perfectly suitable global conditions for another major-scale lira crash. It is not possible to estimate the exact timing of any crash ahead. The government would burn through whatever it can in the FX market before letting the currency plunge into the abyss.

As things stand, the market expects the Fed to deliver another 75bp rate hike at its next rate-setting meeting scheduled for November 2.

November is a real candidate for some very serious shake-ups on the financial markets.

RBI's 2022 profits soar to €3.6bn, with Russian operations representing more than half
Romania gets European Commission’s green light for €1.6bn investment and development bank
M&A in Emerging Europe fell by 20% to €32.93bn in 2022