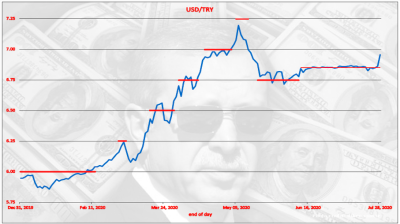 The Turkish lira slumbered for two months, largely held in a narrow band of 6.84-6.86 to the dollar, but on July 28 it woke up with a start, realised that in the cold light of day it had feet of clay and crumbled as far as 6.98, the weakest rate seen in a month. There had been rumblings that the corridor was not viable, such as a flash crash on July 3 when the USD/TRY jumped in the blink of an eye to 6.97 before racing back to 6.84-6.86 and a similar occurrence on July 27, but July 28 brought confirmation that the lira’s troubles may be back with a bang. It ended the day at around 6.93 as officials scrambled to build a new wall.

A sure sign that this latest volatility is more than a flash in the pan and has Turkish President Recep Tayyip Erdogan rattled is that the “presidential dictator” once more started making his vague allegations that somewhere out there are fiendish unidentified people working on a plot to bring Turkey to its knees and conquer it.

It has long been obvious that, try as it might, the Erdogan administration cannot for ever keep the lira in a fixed range tolerable to the palace. Turkey’s international reserves are melting away as the defence of the currency goes on in vain and the prospect of Ankara attracting some big deal hard currency appears remote.

“When will the Turkish lira spin out of control in a rout?” is the trillion-lira question that traders ask every day now. Well, as alarming as the fresh weakness in the currency was, the answer was “not yet”. Ankara responded by showing an ability to still keep some kind of grip on the lira, managing to hold the USD/TRY in the 6.90s.

Note, however, that an old tradition is back: offers of free market FX rates at Istanbul’s Grand Bazaar are once more in the picture and the available rate stood above 7.00 on July 28.

“State bank fx traders must have been asleep or in Bodrum [a popular vacation destination on Turkey’s southern Aegean coast], or both,” Timothy Ash of Bluebay Asset Management tweeted on July 28, commenting on the lira’s flash crash the previous day.

“Seems like a big battle ongoing again this morning as state owned banks try and support the lira. At this stage it is pretty clear the lira is no longer free floating but heavily managed,” Ash added in another tweet, before later adding on Twitter: “Not sure there was anything specific over the past 24h, it just seems it’s an accumulation of concerns over bad CBRT [Central Bank of the Republic of Turkey] policy and massive intervention whittling away at the net reserve position—the CBRT spending other people’s money.”

The Financial Times reported on July 28 that Turkish authorities have burnt through $2bn defending the lira in the latest volatility wave.

There have been articles—including one carried by our own organ—indicating that the lira’s latest woes, particularly its struggle against recording a record low against the euro, may have been mostly driven by fears that Brussels may impose sanctions on Ankara over illicit drilling for hydrocarbons in the eastern Mediterranean but the EUR/TRY rate stress appears to be simply down to the euro rising against the dollar.

The trolls of Erdogan’s ruling Justice and Development Party (AKP), meanwhile, are turning their ire on foreign analysts, including Ash. That an AKP troll should pick a fight with Ash is a touch ironic given that he generally supported the party’s attempts at steering the economy during the time when Turkey still offered positive real yields. Ash has now reiterated his regular call for an initial lira devaluation and a subsequent bold rate hike.

While some of the ugliest trolls of the AKP engaged in Twitter fights over the lira, Robin Brooks of the Institute of International Finance (IIF), known to Turkish Twitter users as “5.50 Robin”, got into a row last week with Alvaro Ortiz of Spanish lender BBVA, which controls one of Turkey’s largest lenders, Garanti BBVA.

There have been signs in recent days that the Turkish government is taking steps to limit the latest loan growth madness prompted by its fixation on using cheap credit to ward off an economic slump.

Ibrahim Kahveci of local daily Karar wrote on July 27 that the signs were caused by FX needs. In the coming days, we will see whether the government will manage to save the lira from going over the edge of the abyss. Or is it already too late?

In May, when the USD/TRY hit the 7.20s and its latest all-time low, Brooks wrote on Twitter: “Too much negativity on Turkish Lira. Below 7.00 there's the ‘managed float’ talk. Above 7.00 there's now focus on [the coronavirus pandemic-triggered collapse in] summer tourism. Big picture: (i) Lira is a free float, just look at it since 2018; (ii) exchange rates are forward-looking, so summer tourism should be in the price.”

Also significant is that AKP trolls have been engaging in verbal brawls on TV over their unending relations with the cleric Fethullah Gulen, Erdogan’s arch ally-turned-enemy, self-exiled in Pennsylvania.

Whenever it comes, the collapse of the AKP will without doubt be a really ugly affair. It will not just collapse on the heads of the Turks. It will also impact the region.

In other developments for those trying to keep track of the rotting foundations, after Turkish interventions in the currency market that have gone on for two years, Standard and Poor’s said on July 24 that it now classifies Turkey's FX regime as a managed float. Fitch Ratings on July 3 calculated  Turkey’s swap-adjusted international reserves. On July 28, the central bank released its lagged open swap stock data.

Goldman Sachs has estimated that Turkey sent $5bn of reserves up in flames in June, bringing the overall figure to $60bn in H1.

When the state lenders’ net FX deficit is added into the analysis, overall interventions since January 2019 are estimated at about $103bn, including $70bn so far this year as of July 17.

On July 17, the central bank tapped $1bn from local lenders in a 3-month swap.

Accordingly, those international development banks—for instance, the European Bank of Reconstruction and Development and the World Bank Group’s International Finance Corporation, or IFC—that open a lira account with domestic banks will be allowed to conduct swap transactions that involve buying lira with the Development Investment Bank of Turkey (TKYB) and in the FX swap market at Borsa Istanbul.

The international development banks will also be allowed to conduct repo and reverse repo transactions at Borsa Istanbul, and lira depo transactions with domestic banks.

On May 6, the BDDK cut local lenders’ swap limits with foreign counterparts to 0.5% of their equity, meaning, de facto, no swaps. Aiming to limit lira leakage to the London offshore market, it had on April 13 already squeezed the limit to 1% from the previous 10%.

On May 20, the BDDK exempted Euroclear Bank and Clearstream Banking from limitations imposed on Turkish banks in their lira transactions with foreign institutions.

Hope is the poor man’s bread. These are torrid days. Ankara would welcome some capital inflows.