It’s GDP Jim, but not as we know it. / NBC Television.
By Will Conroy in Prague and Akin Nazli in Belgrade March 29, 2018

Coming alongside high inflation, gauged as running at 10.26% y/y in February, the growth figures “will heighten fears that the economy is overheating”, William Jackson, senior emerging markets economist at Capital Economics, said.

“Picture this as the Starship Turkish Enterprise currently growing at warp speed,” commented Timothy Ash, senior emerging markets sovereign strategist at BlueBay Asset Management. The thrusters had been put on to get through a bit of turbulence—namely the downturn that followed the attempted coup in July 2016—and Ash said he would “question whether the thrusters are going to overheat and blow out before the destination (early elections) is reached”. 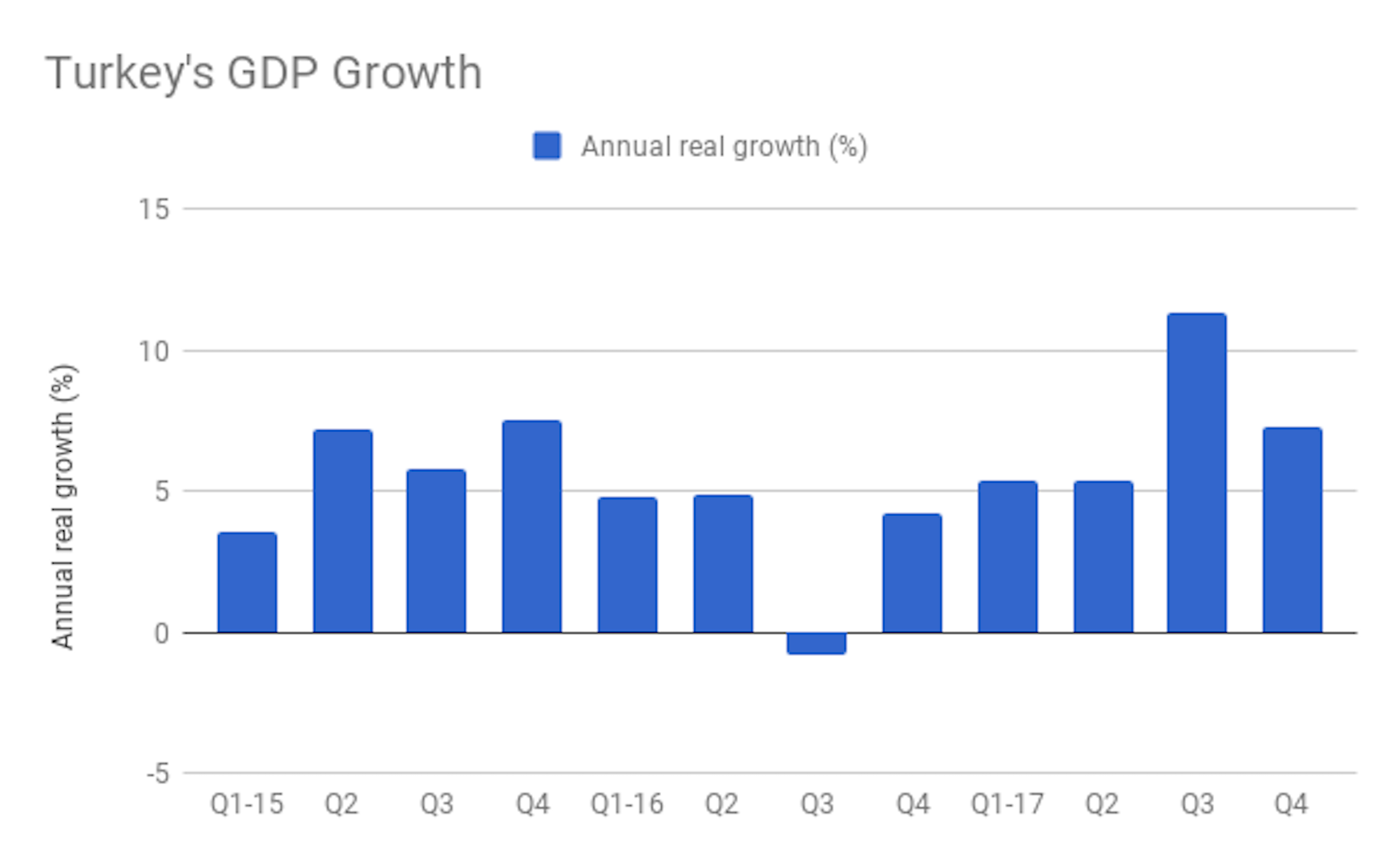 With Turkey having become the fastest-growing G20 nation, recording its biggest annual expansion in output since 2013, Ash added in a note to investors: “I guess most economists would question how sustainable this pace of growth is given the widening current account deficit (5.5% of GDP), double digit inflation (10.3% and double the central bank target) and the large external financing gap ($220bn or 25% of GDP and double the FX reserves). Add in all the domestic political and then geopolitical concerns.”

Jackson further observed: “While the headline rate of growth is itself alarming, the breakdown also suggests that growth is increasingly unbalanced. In particular, strong domestic demand is leaking into imports, which expanded at their fastest pace since 2011. External vulnerabilities are rising.”

The Turkish lira (TRY) stood at TRY3.9701 to the dollar at around 1500 Istanbul time on March 29, strengthening from around the TRY4.0 level seen in early trading. Jackson estimated that it would probably have to reach around the TRY4.25 level to trigger a rate hike from the central bank. The currency lately touched a record low of 4.0375. It has fallen around 5% against the dollar this year, making it one of the worst performing emerging market currencies.

Growth momentum in Turkey appears to still be strong, Jackson noted, saying: “Indicators for the start of this year suggest that growth has remained strong. Industrial production expanded by 12.9% y/y in January, up from 10.6% y/y in December. And while the manufacturing PMI edged down last month, it stayed close to a seven-year high.”

"Spectacular"
Turkish economy minister Nihat Zeybekci reacted to the latest growth figures by saying they were a “spectacular achievement” and that all the indications are that growth will be strong in 2018 too. The economy is creating investments, exports and jobs and is growing in a balanced fashion, he said. Turkey, now essentially in the same growth stratosphere as India and China, has a faster growing economy than any European state and things could stay that way for at least the next decade, Zeybekci said.

Markets had expected 2017 growth of 7.25% compared to the 7.4% officially announced, according to a Reuters poll of economists.

Looking further at the current account deficit—making Turkey vulnerable to external shocks as it relies on foreign capital inflows to finance the gap—Ash pointed to the Turkish economy’s “big net export drag, with exports up 9.3% and imports up 22.7% y/y which kind of shows the problems on the current account”. He added: “The annual data on the latter score is a bit better with exports up 12% and imports 10.3%, but there was a really marked deterioration from Q1 2017 onwards which is worrying”.

Reuters quoted a statement from Arda Ermut, president of the official Investment Support and Promotion Agency of Turkey, in which he said that the robust growth continued to be a "magnet" for foreign direct investment. "Pro-business and reform-oriented policies have been a key driver of economic growth in Turkey and the government is committed to continue these policies," Ermut added.

The recovery of the Turkish economy is very much debt-fuelled. A substantial aspect of that has been the state’s TRY250bn (€63bn) credit guarantee fund  (CGF) for backstopping bank loans to businesses.

The markets have grown increasingly worried about the double-digit inflation and the sinking Turkish lira since last year. Since the beginning of 2018, overheating concerns have also been weighing on estimates of the Turkish economy’s likely future performance.

The Turkish government is targeting annual GDP growth of 5% for the years running from 2017 to 2020.

Earlier this month, the OECD raised its forecast for Turkish GDP in 2018 by 0.4pp, upgrading the forecast to 5.3%.

Last month, Moody’s Investor Services raised its growth forecasts for Turkey to 4% in 2018 and 3.5% in 2019, from 3.2% and 3.3%, respectively. However, on March 8, it cut Turkey’s sovereign credit rating further into junk, saying that the Turkish government—which has followed a strategy of injecting huge stimulus into the economy since the downturn that followed the attempted putsch—seems focused on short-term measures, undermining effective monetary policy and economic reform.

Turkey’s parliamentary and presidential elections—after which the country will switch to an executive presidency with the post of prime minister abolished—are scheduled for November 2019, but there is a substantial amount of speculation that Turkish President Recep Tayyip Erdogan will go for earlier elections, which may even be held this year, in an attempt at coinciding with a time when the economy is still humming.