Trust in Russian President Vladimir Putin sinks to 25%, approval of his actions down to 63% 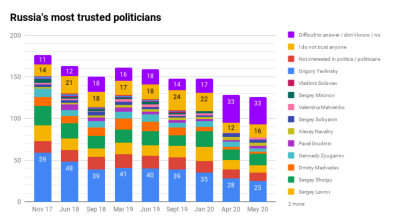 Trust in Russian President Vladimir Putin has fallen to 25%, its lowest level ever, while approval of his actions is down to 63%, the same level as in 2013 / Levada Center
By Ben Aris in Berlin May 31, 2020

Trust in Russian President Vladimir Putin continues to sink as the pubic are unimpressed with his performance in response to a series of shocks that have hit the Russian economy in the first quarter of this year.

Trust in Putin slumped 10 percentage points between January and May to a multi-year low of 25%, according to independent pollster the Levada Center, down from a peak of 59% in November 2017.

Putin has been caught between a rock and a hard place as he tries to avoid responsibility for the state’s poor response to the coronavirus (COVID-19) epidemic in Russia that has resulted in the third highest number of infections in the world (387,623 confirmed cases and 4,374 deaths, as of May 30, according to John Hopkins), behind only Brazil and the US.

Putin has pushed off responsibility for dealing with the epidemic to the regional governors and remained isolated and aloof for most of April and May while the entire country was put on lockdown. The country is used to seeing Putin as a man of action, ending the chaos of the Yeltsin-era, facing down the US sanctions and winning a war against terrorists in Syria. The new Putin, sitting alone in his office in front of a bank of TV screens holding online meetings, is a new image that sits less well with the population.

However, trust in Putin is still well ahead of trust in any other politician. The next most trusted politician remains Defence Minister Sergei Shoigu, but even he has seen his rating almost halve from 23% in November 2017 to 14% as of May.

Almost all of Russia’s ruling elite have seen their trust ratings fall in the first quarter of this year, including opposition leader and head of the Communist Party Gennady Zhuganov, whose rating has plunged from 7% to 4%.

Indeed, the only politician that recorded any gains at all was the newly installed Prime Minister Mikhail Mishustin, who saw his trust ratings rise from 3% in January when he was appointed to the post to 13% in April as the population got to know him a bit better, but then his rating fell two percentage points to 11% in May as the coronacrisis gathered pace.

Anti-corruption blogger and opposition activist Alexei Navalny benefited a little from the coronacrisis, with his trust rating rising from 3% in January to 4% in May. But despite being the darling of Western media, Navalny remains a political non-entity in Russia, as his current rating is its highest ever and up from a mere 2% in November 2017.

Indeed, the only category that saw big gains was “I don't know”, which almost doubled from 17% in January to 33% in April and May, triple its level from when the poll was started in 2017. The Kremlin can take a little respite from the changes in the “I don't trust anyone” category that fell from 22% in January, its highest level ever, to 12% in April, its lowest level ever, and 16% in May, which is lower than any other year except November 2017. That suggests the population is not blaming the government for the coronacrisis, even if they are unhappy with its response.

In a separate poll that asked “Do you approve/disapprove of Putin’s actions?” Levada found that Putin’s score has also fallen marginally over the first quarter to 63% as of March. Approval for Putin’s actions has been over 80% for most of the last six years since the annexation of the Crimea, but fell into the 60s in 2019 as the population’s life failed to improve, despite the end of a four-year long recession.

Putin’s current action approval rating is still on a par with his rating in 2013, when economic growth in Russia fell to zero despite $100 oil prices as the petro-driven growth model was exhausted, marking the start of Russia’s stagnation since. Putin was able to counter that fall with his aggression in Ukraine, but this time round he has run out of options other than to deliver on growth and improving prosperity through the 12 national projects programme.

The coronacrisis is a major political setback for Putin, as the investment into the national projects that are crucial for his political longevity will be stymied by the knockback Russia’s economy is receiving. The government has been at pains to say that it will stick to the spending plans and continue investing into the national projects thanks to the Ministry of Finance's ability to tap the RUB9 trillion ($128bn) in the National Welfare Fund (NWF), but the programme was not going well before the double-headed oil price and virus crises hit.

Finally, the majority of Russians approve of the new PM, who is one of the few politicians to see his ranking improve since the start of the year. In a poll that asked the same question of Mishustin as of Putin, his approval improved from 48% in January to 51% in March, but this was before he got sick in April and had to remove himself from work for a fortnight.

On balance, respondents seem moderately impressed with Mishustin and certainly like him a lot more than his predecessor, Prime Minister Dmitry Medvedev, whose rating in the trust poll has fallen steadily from the already low 11% in November 2017 to a mere 2% in May this year.

Romania’s GDP increased by a real 6.5% y/y in the first quarter of the year, surprising analysts who had expected more damage from the war in Ukraine.

Full-year economic growth forecast at around 5% despite Ukraine-driven slowdown.

The impact of sanctions on Russia, higher financing costs and lower purchasing power amid rising inflation are likely to dent growth in the coming quarters.

Russians trade TV news for social media as war-weariness sets in
7 hours ago
Net FDI in Bulgaria jumps four times y/y through March to €1.05bn
16 hours ago
Romania puzzles analysts with robust 6.5% GDP growth in Q1
1 day ago
Poland’s GDP expands 9.1% y/y in Q1, brightening outlook for the year
1 day ago
Low base and pre-election handouts lift Hungary's GDP growth by 8.2% y/y in Q1
1 day ago